Saturday Radar: GamesRadar’s best for the week of 9/15/14

Saturday Radar returns with a mostly Destiny-flavored slate of articles. We’ve got a review to share with you, as well as a piece about the game’s longevity, and then an article taking a peek at all the video game related movies still in development just to shake things up a bit.

Pretty straightforward here, this is GR’s official review of one of the most difficult to review games in a while. Bungie’s first multi-platform (and non-Halo) game in a good long time is a massive hit, but it’s also a title that’s drawn its fair share of criticism for a good number of things. Here in David Houghton’s review he cites more than a few of those ‘issues’ that various folks have had with the game, and shoots down almost al of them- including the fact that this is a title that’s basically become known as a ‘multiplayer’ game.

Take a read through, even if you’ve read other reviews, and you’ll probably come away with one or two myths debunked about Destiny. Then, when you’re done, take a read through our own review of the game that hit this week and get yet another take in what’s already one of the biggest selling ‘new IPs’ of all time.

I feel like saying ‘Destiny is a game that’s going to be spinning in the drives for a long time to come’ is probably an understatement. This is a game that’s built for the long haul, a game that’s meant to be played for months or even years and gone back to over and over again. The case made for that statement is right here in Destiny reviewer Dave Houghton’s article detailing the short and very long of the game.

This piece was actually written before his review, so you’ll notice him mentioning here and there that it was simply too soon to pen a review of the game since it really only starts at level 20. That’s not to say that there isn’t a bunch to do, and a lot of fun to be had before you get that high, but the real action and multiplayer shenanigans only kick off after you’re over the twenty-hump. And then some.

So if you’re one of this worriers that Bungie’s latest might not hold your interest for all that long, click here and be soothed Guardian, because the best is yet to come. 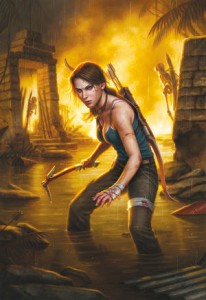 A little something for those not interested in (or already sold on) Destiny. This compilation piece by Brittany Vincent and Jason Fanelli takes a brief look at the myriad of gaming flicks that are in development right now and should be coming to a multiplex somewhere in the next few years.

Some of these you’ve no doubt heard of; stuff like a new Mortal Kombat, Halo, Gears of War, God of War, a Tomb Raider reboot and more have been rumored and talked about for ages. Others still have been super-close to making it to the silver screen and just might be there sooner rather than later (like Uncharted, Sly Cooper and yet another *sort of* Resident Evil), but there are still others that I’ve never heard were even being thought about, and I’m willing to obey that you haven’t either.

Did you know that there’s a Far Cry movie on the drawing boards? How about Splinter Cell? Actually there are a ton of Ubisoft properties, along with InFamous, Temple Run (really!), Devil May Cry, and even Dante’s Inferno (based on the game from 2010) are all in the works in one way or another. Of course, whether they actually get to the final production stages or not and see release is very much up in the air, but it’s nonetheless kind of awesome that all this stuff is even being mentioned and seriously worked on.

Take a look at the full list here and then dare to dream of a day that the ‘video game’ adaptation gets just as much cred at the cineplex as the comic book film does today.

Jason's been knee deep in videogames since he was but a lad. Cutting his teeth on the pixely glory that was the Atari 2600, he's been hack'n'slashing and shoot'em'uping ever since. Mainly an FPS and action guy, Jason enjoys the occasional well crafted title from every genre.
@jason_tas
Previous Styx: Master of Shadows trailer dies harder… and often
Next Diablo III: Reaper of Souls – Ultimate Evil Edition (Xbox One) Review