Bloodshot #25 be a big issue for the series in more ways than one. 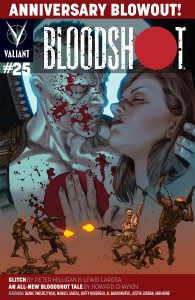 In the tradition of X-O MANOWAR #25, HARBINGER #25, and ARCHER & ARMSTRONG #25… a murderer’s row of all-star talents is going all-in for an oversized, 48-page anniversary blowout chronicling the classiﬁed history of Valiant’s most dangerous, most brutal, most relentless hero – BLOODSHOT!

Meet the man behind Bloodshot – or is he? – when one soldier’s untapped killer instinct takes over in a feature-sized lead tale of blood, guts, and heart by Peter Milligan and Lewis LaRosa! PLUS…an all-new story by comics master Howard Chaykin! The original BLOODSHOT launch team of Duane Swierczynski and Manuel García join forces once again for a brand new adventure! AND…Duffy Boudreau and Al Barrionuevo take you on Bloodshot’s journey from the end of the line with H.A.R.D. Corps to the Colombian jungle where Unity found him!

Packed to the rafters with bonus stories and artwork and a complete cover gallery of Bloodshot’s exploits from 1993 to today, the BLOODSHOT #25 anniversary extravaganza also also features standard covers by Lewis LaRosa and Al Barrionuevo; incentive variant covers by Rafael Albuquerque (American Vampire) and Bryan Hitch (The Ultimates); and a new throwback variant featuring Bloodshot’s original logo and trade dress design by Bloodshot co-creator and comics legendDon Perlin (The Defenders).

“BLOODSHOT #25 is going to be a remarkable milestone for Valiant on multiple levels,” said Valiant Publisher Fred Pierce. “Not only is it the fourth Valiant launch series to cross the 25-issue threshold, but, with Bloodshot taking a lead role in THE VALIANT in just a few months, the timing couldn’t be better to celebrate one of the most iconic and successful characters in the entire Valiant catalog. There is a reason why fans continue to be drawn to this one-of-a-kind creation, and we’ve lined up an all-star cast to give him the anniversary celebration he deserves.”

In the wake of the devastating events of BLOODSHOT #25, Valiant’s most wanted man-at-arms steps directly into THE VALIANT – the highly anticipated prestige format mini-series from superstar creators Jeff Lemire, Matt Kindt, and Paolo Rivera beginning in December. An entirely self-contained comics event spotlighting Bloodshot, Eternal Warrior, Geomancer, and a cast of heroes and villains from across the Valiant Universe, THE VALIANT is a visionary new adventure from three of the greatest creative talents in comics today.

Lots of reasons to buy in for this one, especially if you’re a Bloodshot fan… and even if you’re a newcomer to the series actually.  Since Bloodshot #25 dregs up the past with (possibly) the original man that the Bloodshot… construct(?) is based on and fills in the gaps between his falling out with H.A.R.D. Corps and joining up with Unity.

There really isn’t too much that’s not cool about this issue. There’s a ton of talent working on it from the artistic and writing ends, it’s set to be bubbling over with content, and it leads into The Valiant, Valiant’s hush-hush event mini-series that’s sure to turn a few heads all its own. Basically, if you’re a fan you don’t want to miss this one, and if you’re not, well, you might be after reading Bloodshot #25.

Grab it on the racks this coming November.

Jason's been knee deep in videogames since he was but a lad. Cutting his teeth on the pixely glory that was the Atari 2600, he's been hack'n'slashing and shoot'em'uping ever since. Mainly an FPS and action guy, Jason enjoys the occasional well crafted title from every genre.
@jason_tas
Previous Destiny goes to the Red Planet in new trailer
Next Middle-earth: Shadow of Mordor season pass announced