Mode7’s sports based strategy game gets an update and a rebranding. 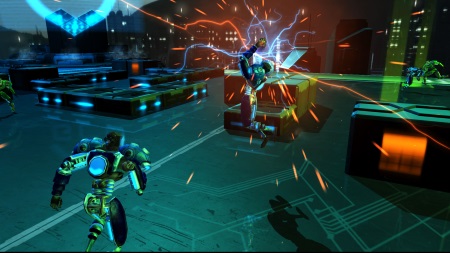 An update has been released today for Mode7’s forthcoming turn-based strategy game, Frozen Endzone.  Arguably the biggest change is that the game has been rebranded as ‘Frozen Cortex’.  The reasons were, according to the developers: –

“1.) The original name was a bit rubbish and we got bored of it
2.) We think the game looks better like this
3.) Some people thought we were making a Madden game with robots: that is not what we’re doing”

It’s not just a name change, though.  There are some updates, including Mac and Linux support for the game.  The full list of changes is as follows: –

– Throwing UI improved
– Intelligent interception-radius rendering
– indicator for whether a move location is “safe” or not
– Minor rules changes to reduce the need to “keep playing when the match is clearly over”; other gameplay improvements
– Quite a few new gameplay options to play around with in the Custom Game editor.
– Significantly updated in-game commentary text
– Other minor changes

Frozen Cortex is still in early beta and you can get into the game via Early Access.  You can check out a new trailer below.

Mike is Brutal Gamer's Indie Editor. He has been playing video games since the early 90s and is fond of racing games, puzzlers and MMOs. Typing /played while in WoW makes him cry, but not enough to stop him playing some more.
@Ognawk
Previous SDCC 2014: comiXology preps giveaways, signings, panels and more
Next In case you missed it, there’s a new Captain America coming to Marvel