Home / Comics / In case you missed it, there’s a new Captain America coming to Marvel

In case you missed it, there’s a new Captain America coming to Marvel

With Steve Rodgers sidelined for an indeterminate amount of time, Sam Wilson (the now former-Falcon) will step up into the role of Sentinel of Liberty. 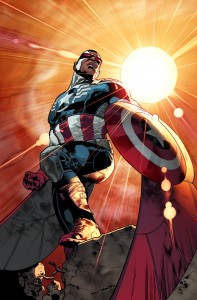 Marvel is excited to announce that beginning in November 2014, the title of Captain America will be passed to Sam Wilson, The Falcon, in the pages of All-New Captain America #1 by series writer Rick Remender (Captain America, Uncanny Avengers) and series artist Stuart Immonen (All-New X-Men).

Announced on “The Colbert Report” by Joe Quesada, “Sam Wilson…The Falcon, is the new Captain America.”

Addressing how Sam Wilson will follow in the footsteps of his predecessor, Steve Rogers, Remender says, “Sam wants to lead by example. To help people see their own selfishness and to turn it around. To build better communities, to never forget the little guy.”  Remender continues, “Sam follows his heart and his belief in what the American dream means and how it belongs to everyone.”

The question remains: what happens with the original Captain America, Steve Rogers? Executive Editor Tom Brevoort says, “Steve’s spirit is as willing as ever, but his body is no longer up to the task of being Captain America. So he’ll employ his skills as the new Cap’s remote strategic advisor, running Cap’s missions from his headquarters in Avengers Mansion and providing Sam with technical support and field information from a distance. He’ll also tutor Sam in how to throw the shield, a skill that’s deceptively difficult for the new Cap to master. So Steve will continue to be a vital part of the series moving ahead.”

For more details on All-New Captain America, visit Marvel.com for their interview with Rick Remender and Tom Brevoort.

Not a surprise to many, Sam taking the Cap role is seeming the logical choice. Not only is he a friend to the ‘real’ Captain America, but he’s also been a longtime Avengers and fits the role well. I’m a little bit surprised to see that he’ll be keeping his Falcon flight suit though, as it kind of makes him a combined hero; half Cap, half Falcon.

Maybe that’s by design though as there’s probably little chance that he’s going to be the man in the stars and stripes for too long a period of time.

Jason's been knee deep in videogames since he was but a lad. Cutting his teeth on the pixely glory that was the Atari 2600, he's been hack'n'slashing and shoot'em'uping ever since. Mainly an FPS and action guy, Jason enjoys the occasional well crafted title from every genre.
@jason_tas
Previous Frozen Endzone Updated, Renamed ‘Frozen Cortex’
Next SDCC 2014: Mezco reveals the One:12 Collective 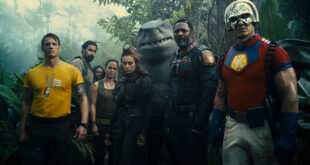 So how did James Gunn pick The Suicide Squad’s team members anyway?