Home / Comics / Get a first look at Valiant’s new powerhouses in Harbinger: Omegas

Get a first look at Valiant’s new powerhouses in Harbinger: Omegas

The followup to Harbinger’s first run in the current Valiant U, Harbinger: Omegas is set to lower the boom this August. 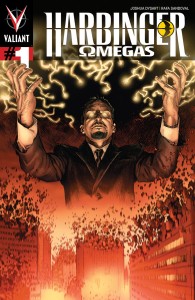 Valiant is proud to present an advance preview of HARBINGER: OMEGAS #1 (of 3) – the FIRST ISSUE of a new landmark chapter for Valiant’s acclaimed vision of superpowers in the real world by New York Times best-selling writer Joshua Dysart (Harbinger Wars) and red-hot artist Rafa Sandoval(Ultimate Hawkeye)!

In the wake of the devastating events of “Death of a Renegade,” the team has been shattered and a teenage Renegade lies dead – a victim of the Harbinger Foundation led by omega-powered psionic Toyo Harada. Out of the ashes of HARBINGER #25, find out what happens when the full extent of Harada’s secret empire is exposed to the public, and just the how Peter Stanchek and the surviving members of the Renegades recover from a catastrophic loss that has changed their lives…their team…and their destinies forever.

A powerful new phase begins for the series that Comic Book Resources calls “surprising and emotional…[and] filled with surprises” right here on August 6th, only in HARBINGER: OMEGAS #1 (of 3)!

Valiant is also proud to announce that HARBINGER #23 – the second shocking chapter of “Death of a Renegade,” featuring the fall of one of the Renegades’ own – has sold out at the distributor level and will soon return with a new printing in July. Look for the HARBINGER #23 SECOND PRINTING on store shelves on July 16th – right alongside the 48-page HARBINGER #25 anniversary spectacular, featuringJoshua Dysart, Khari Evans, Vivek J. Tiwary, Lewis LaRosa, Dan Goldman, Clayton Henry, and more!

Harada getting outed as a full-on super villain is pretty awesome and kind of a new thing for Valiant. While other superhero universes have had big bads for ages, Valiant really hasn’t, with the majority of it’s evil masterminds working behind the scenes in a very conspiratorial way. Toyo Harada is the best kind of bad guy too, one who thinks he’s doing good, so this should be a very cool new era for the characters in Valiant’s universe.

As for what comes after the Harbinger: Omegas miniseries, we still don’t quite know. I certainly wouldn’t bet on Valiant letting the characters and their storyline fall of the edge of the earth though, so probably look for some kind of announcement as the mini gets closer to publication, possibly at SDCC later this month.

As for Harbinger: Omegas, you can look for that to hit the racks on August 6th.

Jason's been knee deep in videogames since he was but a lad. Cutting his teeth on the pixely glory that was the Atari 2600, he's been hack'n'slashing and shoot'em'uping ever since. Mainly an FPS and action guy, Jason enjoys the occasional well crafted title from every genre.
@jason_tas
Previous Divinity: Original Sin officially launches on PC
Next Nordic Games bringing The Vanishing of Ethan Carter to retail