More Spiders than you can shake a web-shooter at, and all of them just as cute as a button. 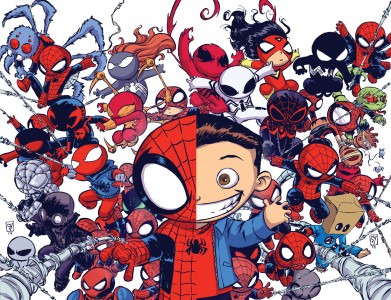 This November, every Spider-Man ever across space and time unite for the epic Spider-Verse event. But first, Marvel is proud to officially unveil the interlocking Spider-Verse variants by Eisner-award winning storyteller Skottie Young!

As revealed by Marvel.com this stunning two-part cover features just a fraction of the Spider-Men and Spider-Women that will feature throughout Spider-Verse as rendered in Skottie Young’s inimitable style. Fans can get their hands on the first of these two interlocking covers when it graces the front of SUPERIOR SPIDER-MAN #32 this August. Blockbuster writers Dan Slott & Christos Gage join fan-favorite artist Giuseppe Camuncoli for a time travelling tale of epic proportions as the Superior Spider-Man travels to the far future of 2099! But can he stop the coming of the Spider-Verse?

Then, hold on to your hats as the second Skottie Young variant cover adorns November’sAMAZING SPIDER-MAN #9 – the first chapter of the universe spanning Spider-Verse event! The sinister Morlun has returned with a singular and terrifying goal – exterminate every Spider-Man in every universe. And it will take thousands of spider-powered heroes to battle back the greatest threat to this universe or any other! Spider-Verse is poised to take the Marvel Universe by storm, and no fan should miss out on these two epic variant covers when they hit comic shops in August and November!

Can’t get enough Skottie Young? Don’t miss Rocket Raccoon #1, the new series written and drawn by Young as it explodes into comic shops next Wednesday (7/2)!

Alright, so just for fun here, how many Spidey’s (of the ‘Man’ and ‘Woman’ variety) do you recognize in that shot above? Outside of the one’s that you should be familiar with if you’re a current fan of the web-head like plain old Marvel U Pete in the foreground, Miles Morales, Spider-Man 2099, Spider-Woman, and Scarlet Spider, some of the versions of Spidey in the piece are downright obscure.

I managed to get an even dozen (outside of the ones I mentioned above), but some of them have left me scratching my head. I consider myself a pretty big fan of the character, but I have no clue as to the origin of that shaggy red Spider-Man, or the Lizard-meets-Scorpion dude. Weird. Then again, Spider-Verse itself is kind of a weird story- and it somehow features Superior Spider-Man as one of the focal points. Although I guess he’s probably a Spider-Man from another section of the multiverse who never managed to shake Ock’s influence. Well, one thing’s for sure, it’s gonna be a wild time.

The special two-part cover begins with Superior Spider-Man #32 (which is also odd) this August and completes with Amazing Spider-Man #9 (which is the first chapter of the Spider-Verse story arc) this November.

Jason's been knee deep in videogames since he was but a lad. Cutting his teeth on the pixely glory that was the Atari 2600, he's been hack'n'slashing and shoot'em'uping ever since. Mainly an FPS and action guy, Jason enjoys the occasional well crafted title from every genre.
@jason_tas
Previous Metro Redux dated, bringing HD apocalypse this August
Next Saints Row IV: National Treasure Edition arriving next month