Collecting the full set of DLC for the game, the National Treasure Edition is one big load of Saints Row crazy. 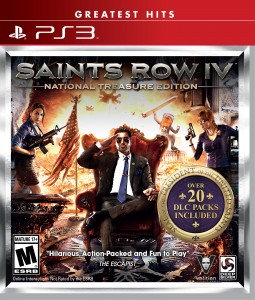 And I mean that in the best possible way of course. If you haven’t played SRIV yet though, you might be a little off yourself as it was far and away one of the best games of 2013. A fantastically funny storyline filled with oddball humor, great graphics and a true ‘go anywhere and do anything’ vibe to it, the fourth Saints Row game was one to remember (if you don’t believe me, read this).

So if you passed up on the game the first time around, or got rid of it in the interim and feel the need to return to virtual Steelport, Saints Row IV: National Treasure Edition will debut on the Xbox 360 and PS3 sometime in mid-July.

Jason's been knee deep in videogames since he was but a lad. Cutting his teeth on the pixely glory that was the Atari 2600, he's been hack'n'slashing and shoot'em'uping ever since. Mainly an FPS and action guy, Jason enjoys the occasional well crafted title from every genre.
@jason_tas
Previous Skottie Young creates interlocking Spider-Verse super-cover
Next Get acquainted with future-tech in the latest Call of Duty trailer