Home / Comics / Spider-Man swings onto Infinite Comics with Who am I? mini-series

Spider-Man swings onto Infinite Comics with Who am I? mini-series

Marvel’s latest online only comic series delves into the recently returned Spider-Man and makes him… a villain? 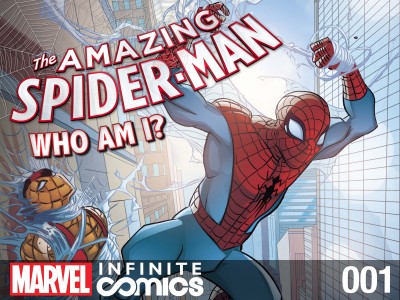 Today, a new adventure begins in Amazing Spider-Man: Who Am I?, the next genre-defying Infinite Comic series from the blockbuster writer Dan Slott & Joshua Hale Fialkov with art by J.L. Mast, Geoffrey Beaulieu and Juan Bobilo! Today, Marvel is proud to announce you can experience the first four issues of this all-new digital comic right now on the Marvel Comics app (for iPhone®, iPad®, iPod Touch® & AndroidTM devices) and online in the Marvel Digital Comics Shop!

Spider-Man wakes up with no idea who he is – but he’s robbing a bank! If you stripped away the memory of the man that is Peter Parker – would the Amazing Spider-Man still be amazing? Would he still be a hero? Designed specifically for mobile devices while fully embracing the technologies of tomorrow, Marvel’s latest digital offering defies expectations at every turn.

Accessible for new fans, but also set in current continuity, the first four issues of AMAZING SPIDER-MAN: WHO AM I? are available right now on the Marvel Comics app (for iPhone®, iPad®, iPod Touch® & AndroidTM devices) and online in the Marvel Digital Comics Shop!

As Peter Parker struggles to remember who he is, don’t miss your chance to experience an epic new Spider-Man story in the genre defining Infinite Comics format!

It’s unclear as to whether Spidey’s memory loss in the new series has anything to do with the recent brain swap with Doc Ock or not. It certainly seems like it might since we basically just saw this tale play out in a way in the pages of Superior Spider-Man for the past year or so. In any event, this is Peter Parker under the webs, not Ock in Spidey’s skin, and that is different from the SSM storyline.

What spurred the memory loss is still a mystery though. And how’s Iron Man involved in the whole thing? Lots of questions, not a ton of answers as of yet, but you can find out what’s happened to Spider-Man’s noggin right now with the first issue of Infinite Comics’ The Amazing Spider-Man: Who am I? Part one of four is ready for download.

Jason's been knee deep in videogames since he was but a lad. Cutting his teeth on the pixely glory that was the Atari 2600, he's been hack'n'slashing and shoot'em'uping ever since. Mainly an FPS and action guy, Jason enjoys the occasional well crafted title from every genre.
@jason_tas
Previous Nintendo announces interactive figures-into-games line
Next Kirby Triple Deluxe (3DS) Review