Kirby Triple Deluxe is a game that left me with some very mixed feelings. My experiences ranged from pure joy to monotony… 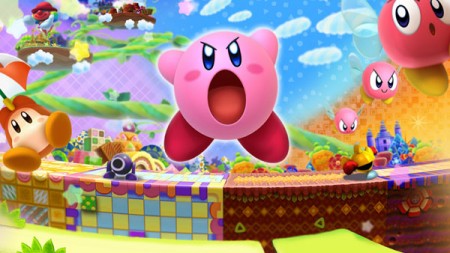 Playing this game was like riding a roller coaster, there were plenty of ups and downs and sometimes you had to wait quite a while before some really outstanding gameplay eventuated. The way the developers incorporated 3D obstacles was very neat and sometimes even challenging. Enemies attack you from the foreground and background; many of them can freely move between the two.

Sometimes obstacles got really interesting as well, like navigating a hoard of gordos which are in the foreground and background. Occasionally, you’re tricked into thinking one of them is in the distance, and you’ll find yourself bumping into it. These moments in the gameplay are superb, and I only wish that the developers made the game more difficult, giving more of a purpose to these sections.

Much of the time, it didn’t really even matter how much I was hit, because Kirby was such a juggernaut. The health bar is incredibly long; add the fact that healing items are sprawled across every single nook and cranny in the game, and you’re left with a somewhat hollow feeling after beating certain sections.

Granted, you can just choose to skip some healing items, but sometimes they’re forced on you, as you’re hurled into them via a cannon, or have to pass through them in order to proceed. These mechanics were frustrating, and often-times stifled any attempt at self imposed challenges; which is a highlight in Kirby games. Kirby was never about crushing difficulty, it was more so about choice, being able to decide whether you want to just breeze through or truly test yourself.

Now, it’s not to say there aren’t any challenging aspects, any good Kirby game has features like the extra mode, arena, etc. Kirby Fighters in particular could get very tough, and was quite fun to play through; I didn’t really care too much about De De De Drum Dash to be honest, but that might just be my bias due to the fact that I’m not really into rhythm games. The arena was satisfying, a true test of skill provided you don’t go for healing items; bosses such as Kracko put up quite a fight when you’re not at full health. Sometimes they even knock you into pits, killing you instantly. True to Kirby tradition, the bosses are the meat and potatoes; from interesting attacks such as Kracko turning into a giant thunder cloud, to De De De taking an poleaxe and swinging at you from the foreground and background, Kirby Triple Deluxe manages to keep you on your toes.

The one problem I had though, was the health yet again; in the main game, you’re just too powerful to really die against bosses, you need to be worn out in order to be challenged. This is where the arena came in to save the day. I won’t spoil the extra mode, but while its bosses are indeed heavy hitters, they go down too quickly. Kirby’s Return to Dreamland surpasses Triple deluxe with its extra mode, as your health bar was cut in half, it would have been more interesting if they had followed suit. The game mechanics themselves are wonderful, Kirby has plenty of interesting powers to employ, including some new attacks that have been added to the game. One example would be the sword ability’s new projectile attack; you hold up on the d-pad and your sword starts to glow, when you press A, a wave of energy comes out.

Alongside new attacks with abilities, there are new abilities as well. My personal favorite was the archer, it really reminds you of the archer class in Fire Emblem. You can perform some fancy moves such as charging your bow up for a critical hit, hiding behind fake bushes made of wood to avoid attacks, or firing arrows as you jump in the air. Circus was also a fun ability to use; you can do some neat acrobatics as well as juggling and blowing up balloons to do some massive damage. Bell Kirby was a little hard to use, as you often left yourself very vulnerable when attacking, but interesting nonetheless. Beetle was great, it’s a nice replacement for Suplex, adding in some neat new attacks such as skewering your foes as you loop around in the air.

While hyper nova was rather cool at first, its novelty grew tiresome after a while; there just wasn’t as much variety offered as the super abilities. It’s great seeing Kirby inhale just about everything (including the boss flowery woods in one level) but it can only keep you interested for so long. There are only so many puzzles you can solve with this feature before it gets stale. Sometimes it was handled great, like during the final boss fight where you had to lodge giant projectiles back at the boss, though for the most part it just seems like a knockoff of the super abilities.

The graphics for Kirby Triple Deluxe were great; many times it felt like you were playing a Gamecube game in the palm of your hands. From the shading, to the detail of enemy models and stages, you can tell the design was handled with care; the only complaint I have is that it felt a little cramped at times, probably due to hardware constraints. All in all though, it’s a treat for your eyes, and it’s one game where you definitely want to play with the 3D on in order to experience it fully. Typical of any Kirby game, the music is fantastic; the boss themes are especially catchy. I often like to listen to them in my spare time, remixes of themes from older games like Big Forest put a huge smile on my face.

To reiterate, Kirby Triple Deluxe is indeed like a roller coaster, my experience with this game rose and fell frequently. Some of the boss battles were amazing, and the presentation of the game was handled very well. I just wish there was more for veterans of the series.

Well, my name's Christopher Deleanides as you all know and I'm the Nintendo Editor here at BG. I've been playing video games since 1992, and I've been a Nintendo fan the entirety of those years. My love for video games as well as Nintendo hasn't changed, and probably never will. The only thing that comes close is politics, as I'm very deeply involved in both local and international issues.
Previous Spider-Man swings onto Infinite Comics with Who am I? mini-series
Next Feature Friday: Do horror movies have to make for horrible games?