The lovable little dino goes back to work against Kamek and his nefarious Koopa horde in a platformed that’s maybe a little too old school. 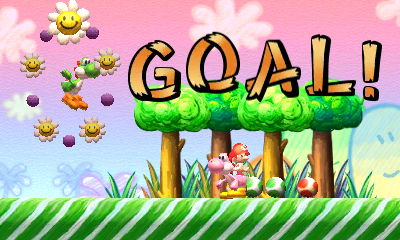 If you remember Super Mario World 2: Yoshi’s Island on the SNES, then you already know a great deal about Yoshi’s New Island on the 3DS. A direct sequel to that game, YNI picks up the story right from the ending of the original. It seems that the stork brought the Mario bros. to the wrong parents in the Mushroom Kingdom (by the way, who thought that Mario and Luigi were from the Mushroom Kingdom? I thought they were from Brooklyn) and had to go back for the babes. In correcting his flight path, that apparently bumbling bird then was ambushed by Koopa sorcerer Kamek and taken prisoner along with baby Luigi (typical).

Mario tumbles back down to the isle of the Yoshis in the commotion and hooks up with them one more time to find his lost little bro. Yes, this is basically the same story as the first game set up as a sequel, but isn’t that the same for all the Super Mario games? The story lines, or lack thereof, never really hurt the franchise before and it’s honestly the case here as well. All is not completely well though, in this return trip to Jurrasic Pa… I mean Dinosaur Island.

The graphics are familiar Yoshi fare throughout the game, which is both good and bad. For starters, you’ll note that the look of Yoshi’s New Island is almost exactly the same as the original title that saw release on the SNES way back when. This isn’t really ‘bad’ per say, but I would have liked to have seen an evolution of the series in the same vein as Super Mario’s various lines that are going right now.

Mario 3D Land/World has a very specific look to it, while the New Super Mario Bros titles have that staple Mario vibe that we all know and love, but with an excellent, modern graphics engine behind them. Here though, it’s pretty much Yoshi’s Island again, complete with large amorphous enemies and Shyguys aplenty. Again, that’s not to say that it looks bad, or is unpleasing to the eye at all, it’s just that we’ve seen this game before and something different and more imaginative would have been welcome. This is Nintendo we’re talking about after all, isn’t being ‘imaginative’ part of their company as much as Mario and Yoshi himself are?

Much like the looks, the sounds of Yoshi’s New Island are all very familiar. They’re honestly a little nondescript as well with little in the way of tunes that you’d actually want to listen too, or even ones that have that Nintendo feel to them. The soundtrack is kind of flat overall, though it is still appropriately cheery, which makes for a good backdrop to the in-game action.

Spot-on however, are the controls. I never had any issues in my play through, which is something that we’ve maybe come to expect from Nintendo’s titles (though this one was developed by Arzest). Along that same line, there are some new elements there including the giant enemies and the eggs that they produce… which is still a little gross. Yoshi can latch onto a massive Shyguy with his tongue and reel him in just like any other enemy (with a little added button-tapping). After you nab him though, you can shoot out a monster-sized egg.

What’s that good for you ask? Well there are sections of level that need to be cleared in Yoshi’s New Island that weren’t found on his old island, and the only way to do that is with a big egg. Thought targeting eggs and tossing them is the same as always (again), the giant eggs need no finesse. You can simply launch them straight forward and they’ll roll through everything in their path like that giant boulder in Indiana Jones. It’s pretty cool and neat to see.

Also in the game are mini-games that see the title dino transforming into different vehicles and machines. How that happens, we’ll just chok up to Mushroom Kingdom magic, but they’re pretty fun most of the time. Yoshi can turn into a drill to dig, a chopper to fly, and more as he makes his way through bonus stages for goodies. The games are fun for the most part and nicely break up the otherwise straightforward nature of the main game.

I didn’t dislike Yoshi’s New Island. It’s almost impossible to dislike any Mario-themed game I think, and Yoshi’s newest is included in that mix.

Even though ‘dislike’ isn’t a word I’d use here though, as the play through the game was fun, it just would have been great to have seen something truly new. Something like the redesign that the Mario series has gotten, or even the new adventures of Donkey Kong, would have been great to see and even more fun to play. The new elements, like the mini-games were fun, but just not enough. Maybe next time around.

As it is, Yoshi’s New Island is a fun little game for any Mario fan, it just could have been so much more.

Jason's been knee deep in videogames since he was but a lad. Cutting his teeth on the pixely glory that was the Atari 2600, he's been hack'n'slashing and shoot'em'uping ever since. Mainly an FPS and action guy, Jason enjoys the occasional well crafted title from every genre.
@jason_tas
Previous Destination America cracks open the Alien Files for 3rd season
Next Holmes to investigate Crimes & Punishments on the Xbox One this September