Home / Comics / Artist Peter Bergting takes up the penciling chores on Baltimore: The Witch of Harju

Artist Peter Bergting takes up the penciling chores on Baltimore: The Witch of Harju

Creator Mike Mignola’s latest mini-series set in the world of famed monster hunter Baltimore brings a new penciler onboard to hunt down a dark witch and the dead man she controls. 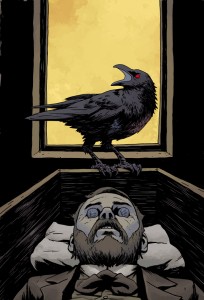 In his newest adventure, fresh off a showdown in London, Baltimore shelters a woman on the run from a possessed dead man and the witch playing his puppet master.

This three-issue miniseries from writers Mike Mignola and Christopher Golden, with Eisner Award–winning colorist Dave Stewart, will feature the artwork of Peter Bergting (The Portent: Ashes, Domovoi). Writer/artist Bergting has written young adult novels in both Swedish and English, and numerous short stories, reviews, and editorials. He has been published in the US, Sweden, Norway, Spain, France, Germany, Denmark, and Italy.

Bergting’s work looks very much in line with what fans are used to seeing come out of Mignola’s various books. And by that I mean that it’s clean and walks the line between cartoonish and realistic, which is perfect for the subject matter. The tone definitely fits in with what Mignola and Christopher Golden have in store for Lord Baltimore as he trudges ever onward in his forsaken little corner of reality.

Not nearly as well known as Hellboy, another Mignola creation, Baltimore is no less interesting and downright fun to read. I have no trouble saying that if you like supernatural tales and the unique spin that the famous comic book creator puts on them, then you’ll like this.

Baltimore: The Witch of Harju #1 is expected to hit comic shops on July 30th and you better believe you can preorder your copy at your local comics shop right now.

Jason's been knee deep in videogames since he was but a lad. Cutting his teeth on the pixely glory that was the Atari 2600, he's been hack'n'slashing and shoot'em'uping ever since. Mainly an FPS and action guy, Jason enjoys the occasional well crafted title from every genre.
@jason_tas
Previous Globlins (iOS) Review
Next Age of Wonders III is a wonder on the PC this week