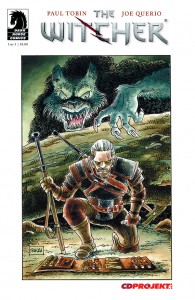 I’ve never made it to the Emerald City con, but it looks like such a cool show. Much more of a ‘comic book’ vibe than most of the others, including the massive SDCC and the almost equally as massive NYCC. That’s not to detract by the way, as both of those cons are suitably awesome, but they’re not the comic-centric events that cons used to be. ECCC seems to have some of that flavor very much in tact though, maybe that’s why Dark Horse Comics will be debuting a four-spot of exclusive editions of four of their upcoming #1’s there.

Buffy, Veil, Serenity, and The Witcher #1 will all see some very cool special editions with artwork that fans of the IP’s in question aren’t going to want to miss out on. Here’s your rundown on the particulars:

Each book will be sold for $5.oo USD at the con and a limited set quantity will be put out for sale each day of the show. So you’ll be able to get a copy each day of the ECCC, but they probably won’t last all that long since there’s a predetermined number of copies put out each day. If you’re a regular con-goer (to any show really) you already know the drill though- get there early.

Jason's been knee deep in videogames since he was but a lad. Cutting his teeth on the pixely glory that was the Atari 2600, he's been hack'n'slashing and shoot'em'uping ever since. Mainly an FPS and action guy, Jason enjoys the occasional well crafted title from every genre.
@jason_tas
Previous Wargame Red Dragon available for preorder (and playing) right now
Next Deus Ex: The Fall lands on PC