Bravely Default is quite possibly one of greatest RPGs since Final Fantasy 5. It’s Final Fantasy done right and a wonderful addition to the 3DS library. 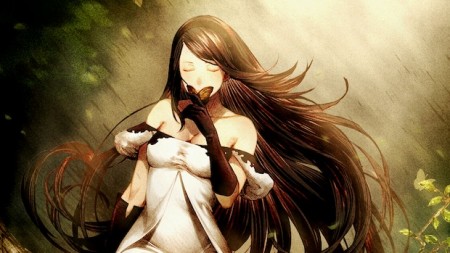 RPGs have changed a lot since the 80s and 90s, we’ve gone from turn based strategy to real time combat with online play. It’s rare to find an RPG or even a JRPG like Bravely Default in this day and age; It’s almost unheard of. If it isn’t loaded with fan service or doesn’t involve hacking away at your opponents repeatedly, then it’s considered quaint and dull. Bravely Default flies in the face of all of this. Not only is it an old school turn based RPG that’s true to the traditional Final Fantasy formula, it expands on it and makes for an even richer experience than you could ever get than most new and old RPGs.

The story isn’t very different than what you’d get in Final Fantasy 5. Fate brings four youths together as they journey across several continents to bring life back to crystals which are being swallowed up by darkness. Like Galuf in Final Fantasy 5, there’s an amnesiac amongst the four heroes named Ringabell. Another similarity is the fact that all four of the heroes are adults, with two males and two females. There are of course differences, one big one being that the characters are more appealing than in Final Fantasy 5. There’s definitely complexity in Tiz, Ringabell, Edea and Agnes. Ringabell is especially entertaining, with his vein and chivalrous attitude. Edea is another oen that you’ll instantly take a liking to, with her fierce conviction and sarcastic banter with Ringabell. You grow to really love all of them, and they feel so real. The only complaint I have is that the voice acting could have been done better. There are a few VAs which stand out, like Tiz’s voice actor who did Asbel Lhant in Tales of Graces F. There is also some major twists that the plot takes, and they’ll definitely make your head spin.

The gameplay is the crown jewel of this RPG, it really stands out not only in terms of old school RPGS but new ones as well. The job system is back, only deeper and far more satisfying. Jobs from Final Fantasy 5 return, such as time mage, salve-maker, which is actually chemist, vampire, which is blue mage by another name, and performer, which is dancer with a different name. Naturally the job system offers you a lot of choices, with the ability to carry other abilities from one job to another; battles become very interesting. There’s nothing better than playing as a group of knights that can perform summon as well. Of course, there’s also some new features as well, such like the brave and default system. Think of it as having a ranger, but with limits attached to them. You’re able to strike enemies multiple times, but there’s price to be paid. For every brave activation, you add a turn that you’ll have to wait before you can act again.

When you default, you go into a defensive position that adds 1 extra brave point (known simply as bp) to your character’s allotment of brave points. Each character has a set amount of brave points, the maximum amount each can acquire is 4. It’s a risk and reward system, and adds much to the strategies you’ll employ during battles. One thing that has been taken away from the battle system is the ATB (active time battle) system. Originally, there was a gauge, that when built up allows the characters to act. When the character acts the gauge depleted and the character would have to wait. This time around, there is no ATB, and battles return to the original system where all four characters attack, then all of the enemies get their turn. This is probably due to the addition of the brave and default system, which would likely clash with ATB.

The music is a treat to your ears, and something you like to listen to even when you’re not playing the game. I often find myself popping in the CD that came with the collector’s edition, enjoying a few tracks here and there. It’s a mixture of very melodic and heartfelt sounds, and invigorating heavy metal in situations like a boss fight. Every location seems to have its own flavor, like Ancheim’s middle eastern sounding theme, the temples’ ambient music, and various dungeon themes. Many of the tracks help set the tone of areas and parts of the story. The graphics also look stunning; the game really pushes the 3DS. The style that the developers chose for this game is very interesting. It’s a combination of hand-drawn environments and 3D animation. It brings the world to life without looking too artificial. The boss designs are intricate, and remind you of the same kind of monsters you would see in Final Fantasy 5; expertly crafted, with attention to detail and careful use of color.

Bravely Default is the Final Fantasy game that fans deserve. It’s the game that many old school RPG enthusiasts have been waiting for since 1992. The job system is intricate, allowing for a variety of choices the player can make. The brave and default mechanic adds a great depth of strategy to battles. The characters are memorable and entertaining, and the plot isn’t too complicated or messy. If you have a Nintendo 3DS, do yourself a favor and try this game out.

Well, my name's Christopher Deleanides as you all know and I'm the Nintendo Editor here at BG. I've been playing video games since 1992, and I've been a Nintendo fan the entirety of those years. My love for video games as well as Nintendo hasn't changed, and probably never will. The only thing that comes close is politics, as I'm very deeply involved in both local and international issues.
Previous TriForce slices up price tags for President’s Day Sale
Next Saturday Radar: GamesRadar’s best for the week of 2/10/14