The complete Far Cry series, all on one handy disc, is set for release in the UK before the end of the month. 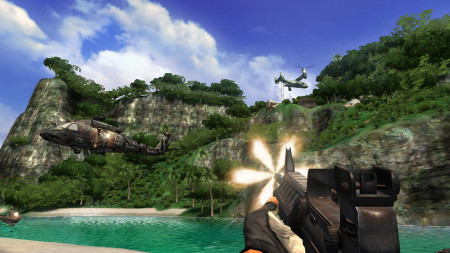 Disconnected from one another by all except name, the games in the Far Cry series are about to hit the UK in a single compilation pack called Far Cry The Wild Expedition. Inside the new release, you’ll find 2004’s Far Cry Classic (completely revamped in HD) alongside Far Cry 2, the critically acclaimed Far Cry 3 and that games spinoff- the sci-fi themed Far Cry 3: Blood Dragon.

Though this set is exclusive to the UK (for now anyway), the already released Far Cry Compilation is still very much available on store shelves. That package isn’t quite as complete as The Wild Expedition since it includes all the game in the series except the redone original, but at least it’s something for Far Cry-ers to sink their teeth into.

Jason's been knee deep in videogames since he was but a lad. Cutting his teeth on the pixely glory that was the Atari 2600, he's been hack'n'slashing and shoot'em'uping ever since. Mainly an FPS and action guy, Jason enjoys the occasional well crafted title from every genre.
@jason_tas
Previous Avengers Undercover flips good to bad with kids from Avengers Academy
Next Mezco’s Sons Of Anarchy Reveal And Toy Fair Preview 2014