Just how would torture and captivity in Arcade’s Murderworld affect the young heroes of the Avengers Academy? Find out what happens when the heroes are tempted to the dark side by none other than Baron Zemo in Avengers Undercover. 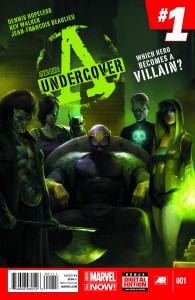 This March, ask yourself the question: If you were a teen superhuman and all the adult heroes failed you when you were kidnapped and tortured, would you switch sides and break bad? Marvel is pleased to present your first look at AVENGERS UNDERCOVER #1 from Harvey Award winning writer Dennis Hopeless and critically acclaimed artist Kev Walker!

Damaged, broken, and forever changed by their experiences in Murder World, five conflicted young superhumans are out to prove to the world they can still be heroes. Now, Bloodstone, Hazmat, Deathlocket, Cammi, Anachronism, Chase, and Nico are going rogue and heading deep undercover with the Masters of Evil. And they’re going to take them down from the inside!

But the longer these teens spend undercover, the deeper they descend into darkness. And the line between good and evil blurs. Before it’s all over – a new super villain will be born!

“In many super hero comics, the series jumps from adventure to adventure, never taking the time to dig deep and explore how a traumatic event would truly effect the protagonists. AVENGERS UNDERCOVER turns that situation on its head by using this trauma as the starting point, “ says editor Bill Rosemann. “What happens after your teachers abandon you? Where do you go when you no longer fit in with your old life? When the world has rendered their judgment as to what lies in your heart, how to you prove otherwise? Dennis and Kev have the answers—and to get them you’ll have to follow our heroes down a rabbit hole of pure evil.”

“There aren’t any rules this time,” says writer Dennis Hopeless in an interview with Marvel.com. “The game is over and the kids who have survived have to go back to real life. AVENGERS UNDERCOVER is the story of what that feels like. We explore the PTSD of the thing.”

“What sorts of life decisions do these kids make once they realize that they don’t really fit into their old lives anymore?” continued Hopeless. “Can they get any of it back? If so, how? And if not, what’s next?”

Their time in Murder World prepared them for death. But nothing can prepare them for their new lives among the Masters of Evil. The longer they stay undercover, their path’s become more clear: Join up with the Masters of Evil for real, or be discovered and killed! If you thought Murder World was dangerous, you haven’t seen anything yet – and it all starts this March in AVENGERS UNDERCOVER #1!

There’s no denying that Murderworld would be a horrific experience for anyone, but how would a team of super humans react to captivity within Arcade’s twisted funhouse? These are people who are used to being in control of situations, not being treated as pawns for a madman’s game after all. And the ‘big team’ of Avengers didn’t exactly come through for them either as they languished and were forced to fight for their survival.

Now that bizarre turn of events looms even larger as the young heroes go undercover in Baron Zemo’s Masters of Evil organization. And as Marvel says, one of them will find that being the good guy isn’t what it was cracked up to be by the end of it. Honestly, it sounds pretty great from the standpoint that this kind of stuff is rarely, if ever, examined in comic books.

I mean, who even remembers the last time there was a book that even mentioned PTSD in any way? Right. So from that angle alone this one should be interesting and worth a read for fans looking for something new from their superhero comics. Avengers fans have all that much more of a reason to have a look too thanks to the inclusion of classic Cap (and Avengers) villain Zemo and the Masters. It’s been a good long time since we’ve seen the popular foils and it’s nice to see the old Baron in action again.

Catch up with the whole Evil clan when Avengers undercover #1 hits the stands on March 12th from writer Dennis Hopeless and Kev Walker.

Jason's been knee deep in videogames since he was but a lad. Cutting his teeth on the pixely glory that was the Atari 2600, he's been hack'n'slashing and shoot'em'uping ever since. Mainly an FPS and action guy, Jason enjoys the occasional well crafted title from every genre.
@jason_tas
Previous Dead Island: Epidemic starting up closed beta soon
Next Far Cry 10th anniversary compilation coming on February 21st