The zero issue line continues with a peek into the past of A&A’s mysteriously multitalented Archer. 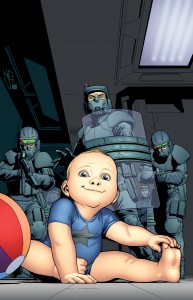 Who is Archer, where did he come from, and how can he do the incredible things that he can do? (Which is everything, remember?) Get ready to learn the startling secret of Archer’s origins with an exciting look into the classified archives of Project Rising Spirit with an all-new starting point, perfect for new readers and longtime fans alike.

Then, discover Valiant’s next wave of breakout characters with three more standalone zero issues from some of the brightest talents in comics today in Bloodshot and H.A.R.D. Corps: H.A.R.D. Corps #0, Quantum and Woody: The Goat #0 and Harbinger: Bleeding Monk #0!

If you’ve been paying attention to our coverage, then you already know the skinny on the #0’s that Valiant Comics will be issuing starting next month. The books are designed to be perfectly in the flow of the series’ that they’re expanding upon, while still being tuned towards new readers to get them fully up to date on the characters of the Valiant U.

Starting with Archer & Armstrong: Archer #0 and continuing into Bloodshot and H.A.R.D. Corps: H.A.R.D. Corps #0, the zero party will continue on through February and March and also shed a little light on two of the most mysterious characters in Valiant’s world with both Quantum and Woody: The Goat #0 and Harbinger: Bleeding Monk #0.

If you’re a Valiant Comics fan, these are necessary reading; and if you’re not, then here are four perfect ways to rectify that issue as soon as possible. Archer & Armstrong: Archer #0 kicks off the zeros on February 5th.

Jason's been knee deep in videogames since he was but a lad. Cutting his teeth on the pixely glory that was the Atari 2600, he's been hack'n'slashing and shoot'em'uping ever since. Mainly an FPS and action guy, Jason enjoys the occasional well crafted title from every genre.
@jason_tas
Previous Crazy is king as Deadpool takes on Carnage this April
Next Star Wars comics franchise to move from Dark Horse to Marvel in 2015