ABC and Marvel team up to bring Castle: Unholy Storm to un-life

One of Richard Castle’s earliest books gets the graphic novel treatment  from Marvel. 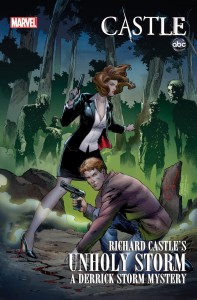 Derrick Storm is back and he has a new, deadly case to solve. When the daughters of four high-powered international businessmen are discovered dead in New York, the NYPD scrambles to bring the murderer to justice. But when a fifth girl is found mutilated in a pool of her own blood, her prestigious French family hires Derrick Storm to run his own investigation and find the real killer. Storm has only one lead – a strange symbol drawn in blood. Storm enlists the help of the beautiful and daring Clara Strike, his CIA handler. Together they uncover a deep web of deception under the guise of mysticism and devotion.

If you’re a fan of Castle on ABC television, then you probably already know that Richard Castle isn’t a real guy (at least, I hope you do). Played by actor Nathan Fillion, Castle is a famous author who rides along with an NYC detective squad and regularly incorporates bits and pieces of their cases into his books.

Unholy Storm doesn’t have that pedigree though, as the book is supposed to be one of Castle’s earlier tomes and one that’s heavy on the spooky, which is something usually not seen on the show.

“We are incredibly excited to, once again, be partnering with marvel to bring Richard Castle’s early literary works to life,” said Andrew W. Marlowe, “Castle” Creator/Executive Producer. “It’s a great way to expand the Castle universe for all our fans.”

“We are, once again, excited to bring the Derrick Storm’s novels to life” said Axel Alonso, Marvel Entertainment Editor in Chief. “Whether you’re new to the world of Castle or a longtime fan, there’s something for everyone in CASTLE: UNHOLY STORM—and it’s the kind of book that reaffirms Marvel’s commitment to creating new fans of comic books.”

It actually is a really cool bit of crossover between Marvel and ABC, who are both a part of the Disney family. The two companies have worked together before, most famously on the Once Upon a Time graphic novel. Using comics as a way to expand Castle’s back-catalog is a great idea too, since the show has a legion of rabid fans who are as much followers star Nathan Fillion as the program itself. Honestly though, is there anyone who isn’t a fan of the former Serenity captain?

Although Fillion isn’t in the book (at least, I don’t think he is…), Unholy Storm should be a very cool mix of action and mystery with Venom writer Cullen Bunn and artists Robert Atkins, Will Sliney and cover artist Carlo Pagulayan all working on it. If you’re a fan of the show, it’s probably a book that more than bares checking out.

The movies, music and television of the '80s are Jessica's obsession. She's a fan of almost everything from the 'me decade' including (but not limited to) Barbie, Jem, She-Ra, Ms Pac-Man and neon print anything.
Previous Miiverse goes live on 3DS with system update
Next Indie Royale Launches Daily Royale Site