Waid and Samnee return for Daredevil #1

The next wave of Marvel NOW! titles will include the return of Mark Waid and Chris Samnee to the pages of the Man Without Fear as Daredevil #1 is set for launch this March. 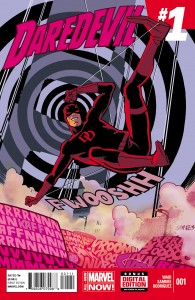 Spinning out of the groundbreaking new Infinite Comic series Daredevil: Road Warrior, Daredevil #1 marks a new start for Matt Murdock. Armed with an imperceptible radar sense and a passion for justice – the blind lawyer from Hell’s Kitchen is ready to make his mark on the Golden City’s streets. But, San Francisco local vigilante, The Shroud is already keeping the street safe – and he’s not ready to share the spotlight!

Big changes are in store for the Man Without Fear – as old haunts and familiar faces emerge ready to give the devil his due!

I’m actually sorry to see DD leave NYC, which has been his home since his introduction in the 1960’s. Still, while New York seems almost overrun with heroes at times, San Fran has next to none. Except for the Shroud that is and I’m sensing a little bit of tension is going to exist between the two protectors of the Golden Gate.

It’s also pretty neat to see Waid and Samnee back in horns again. As old as the character is too, it’s about time that a real fresh start and new jumping on point was introduced for him. DD #1 is (obviously) a great place to start if you’re a Marvellite who’s never picked up an issue of one of the longest standing heroes in the company’s pantheon.

Look for Daredevil #1 to hit shelves this coming March.

Jason's been knee deep in videogames since he was but a lad. Cutting his teeth on the pixely glory that was the Atari 2600, he's been hack'n'slashing and shoot'em'uping ever since. Mainly an FPS and action guy, Jason enjoys the occasional well crafted title from every genre.
@jason_tas
Previous MOGA iOS 7 controllers now in stores
Next It’s a special Saints Row IV kind of Holiday with new DLC pack, pair of contests