Malekith sets his sights on Earth and only the God of Thunder stands in the way of this legions of Dark Elves. 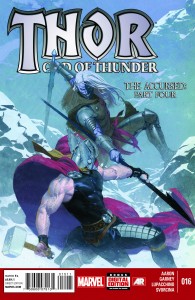 This December, the hunt for Malekith continues across the nine realms in Thor: God of Thunder #16 – the penultimate chapter of The Accursed! From the blockbuster creative team of Jason Aaron, Ron Garney and Emanuela Lupacchino – one of the newly formed League of Realms has fallen. The remaining members of the League stand as the single best hope for defeating Malekith – even as a traitor walks among them! Now, in order to prevent war among the Realms, Thor must do the unthinkable! But it may still be too late to stop Malekith from staging one final bloody raid. A raid that will take him and his sadistic army of Dark Elves straight to Earth! No fan can afford to miss the pulse-pounding Thor: God of Thunder #16!

Including Malekith in the Thor: God of Thunder comics series was probably a foregone conclusion since the fill me starring the long-forgotten villain is currently playing in theaters. Personally, I like moves like this since it keeps the source material relevant in the face of the so called Marvel Cinematic Universe, which is arguably more important and influential at this point than the comics is was based on.

Malekith the Accursed is actually a really neat character too. He kind of straddles the line between the superhero universe that Marvel is and the mythological realm that Thor and all of his supporting cast of characters are really just as much a part of. And for those wondering, yes I said ‘mythological’; elves are every bit a real interns of Norse folklore as Thor was as their God of Thunder. See- live and learn.

Look for Thor: God of Thunder #16 on the racks next month from Aaron, Garney and Lupacchino.

Jason's been knee deep in videogames since he was but a lad. Cutting his teeth on the pixely glory that was the Atari 2600, he's been hack'n'slashing and shoot'em'uping ever since. Mainly an FPS and action guy, Jason enjoys the occasional well crafted title from every genre.
@jason_tas
Previous Etherium makes an impact in new screens
Next Deals: Dark Horse to host digital Star Wars Black Friday specials