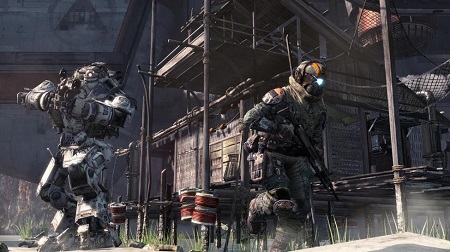 Since the fallout from the problems between Activision and various Infinity Ward staff and the founding of Respawn Entertainment, people have been wondering what we would see from the team of former Call of Duty developers.  The first game to come out of the new studio is Titanfall, and it’s been getting high praise from a lot of people.  We got a chance to get some hands on time with the game at the Eurogamer Expo, and here’s what we thought of it.

The playable demo at the Expo had a game in which two teams fight each other, one trying to rescue an important pilot that the other team has captive.  There are three loadouts each player can choose for their pilot and their mech before they go into battle.  You start as the pilot then, after a cetain amount of time has passed, you can call down your mech and fight that way.  The mechs have far more weapons power, but each of the pilot classes have weapons designed to damage mechs, and a lot of mechs were dying, so you certainly are far from invincible.

Pilots are extremely agile, and can double jump and wall run before jumping off to another area.  It can allow you to scale tall buildings and enter second floor windows with ease, and movement and combat is very fluid and responsive.  You really do feel agile as a pilot.  The mechs, while much more limited in movement, are no slouches either, and can squash enemy soldiers underfoot.

You score points for your team by getting kills and assists, as you would expect, and the number of points awarded to you depends on what you do.  For example, killing AI soldiers awards far less XP than killing human soldiers, whereas destroying mechs earn you more still.  Once one team has scored enough points to win the game, there is an ‘epilogue’ mode, in which the losing team has to try and escape while the winning team has to kill as many members of the opposition as possible before they can get away, with big XP gains awarded for any member of either team who is successful in their goal.

We only got 15 minutes with Titanfall, but it looks like they’ve got a fun, fluid and well designed shooter on their hands.  It makes you wish Infinity Ward had been allowed to do more than pump out Call of Duty every couple of years.

Mike is Brutal Gamer's Indie Editor. He has been playing video games since the early 90s and is fond of racing games, puzzlers and MMOs. Typing /played while in WoW makes him cry, but not enough to stop him playing some more.
@Ognawk
Previous Saturday Radar: GamesRadar’s best for the week of 9/23/13
Next EGX Hands-On: Hotline Miami 2: Wrong Number

Get ready for what’s “Next”. Activision announces Call of Duty “Franchise Showcase”