Deadly Premonition: The Director’s Cut is sort of like a Game of the Year Edition that was released 3 years late. 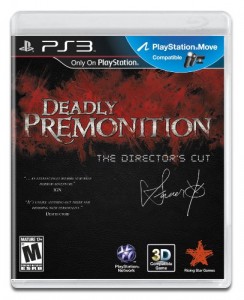 There are few games in existence where critical impressions vary so dramatically. In these situations, you have those who claim that the game beyond some of it’s obvious quirks and glitches, and on the other end of the spectrum there is the group that can’t imagine a worse form of entertainment. Some of the time pre-release hype and excitement factor into this polarization, with a stark contrast in opinion primarily boiling down to how well the final product lived up to the promised visions. However, there are those sleeper hits (or misses) that quietly creep into our lives, and separate the critical response into two distinctly different groups. Deadly Premonition is one of those games. 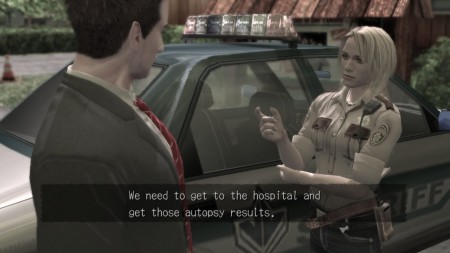 I won’t bore you with the details of the actual gameplay, as I think our existing review does a good job of explaining it, but if I could sort of provide an overall feel of the game, its a mix of Grand Theft Auto exploration and driving system, mixed with the horror survival of Alan Wake with the disturbingly creepy enemies from Silent Hill or Resident Evil. It’s has a campy, sort of Twin Peaks feel, if I could relate Deadly Premonition to an old television show, with a really strange cast of characters. If you currently have a slightly confused look on your face, that’s the sort of expression you’ll have while you play through this special Director’s Cut.

The Director’s Cut edition includes features not included in the original North American and European releases. It features improved visuals, updated controls, an option to play the game in stereoscopic 3D, extra content that was only available as pre-order bonuses, new scenarios, and an extended ending. Even with improved visuals, the game still looks and feels old. You can tell that the developer applied some visual filters to make it look less… outdated. Same goes with the controls, they still feel stiff by today’s standards, but considering the complaints about the original, I’m sure these have been tightened up quite a bit.

Unless you played through the original game, the extra content is probably meaningless, but for those who completed, and likely enjoyed the game, this Director’s Cut edition is probably worthy of a look. 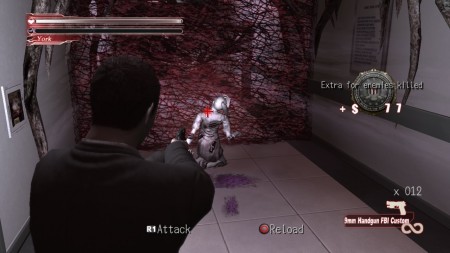 While the collection seems to feel like a “greatest hits” collection, by bundling in all of the extra premium content with a couple of extras, I honestly don’t see the Director’s Cut bringing in a whole lot of new faces. For the most part, Deadly Premonition isn’t all that well known outside of the gaming industry and enthusiast circles. The original was only released on the Xbox 360, at least in North America. It wasn’t the type of game that you found advertised at GameStop in 2010. Instead, it’s like our own secret little video game version of Twin Peaks. All its very strange, very surreal packaging. For those who hated the original, it’s an opportunity to shake our heads in disgust and exclaim, “Why’d they waste money piling more new garbage on top of all the old garbage?!” For the fans, it’s like a film student getting ahold of that special edition release of a favorite film — but the one where the commentary track consists of people like the film editor or cinematographer, rather than the usual director and main actors. It’s likely the version that likely won’t sell a lot of copies, but was released specifically for the die hard enthusiasts in mind.

Did I enjoy my time with Deadly Premonition? Yeah, I think I did. It was certainly strange, and I can see why the game has such polarized opinions. Each side has valid points, and to be honest, if I sided with one, I’d vote more in favor of the game.

But I like weird. I like games that typically try to do something different. There is a character that drives around some dog house-looking automobile. In real life, I’m sure I’d find him annoying (and keep a watchful eye on my kids when he’s around), but in a game I’ll give him a shot.

I like strange. When most people were talking about how great Resident Evil: Code Name Veronica for the Dreamcast was (and it was a good game), I was bragging about how awesome and strange another survival horror game D2 was. I loved that game! I like oddball television and comedies, and movies that tend to think outside the box. At the same time, I can respect that many people don’t. Sometimes one man’s “kinda weird” is another man’s “WHAT THE F–K IS THIS S–T”?

Is this game for you? It depends on how open-minded you are. If you’re okay with quite a bit of strangeness mixed into your survival horror, then you probably will. If you’re expecting Deadly Premonition to be more like a Resident Evil style game, then you probably won’t. I personally suggest that you take a chance and try it… but you’ll find just as many other people telling you the exact opposite.

If you’re still reading this review, then congratulations! That probably means that there’s a pretty good chance you have some sort of fascination with or interest in the original Deadly Premonition from 2010. I’m willing to bet that if you didn’t simply look at the final score and then click away, then there is a chance that Deadly Premonition: The Director’s Cut, might right up your alley. And possibly something that you’ll enjoy.

The Director’s Cut includes all of the premium pre-order content that was released with the original title 3 years ago. It also includes improved graphics, controls, some new scenarios, and an extended ending. This game is not for the casual fan, and it’s not for the haters. It’s for those who played and enjoyed the original, or those who want to see what all of the commotion was all about.

It might accidentally fall into the right hands and hook in a new player, but this is a love letter from Ignition Entertainment and Access Games to their loyal fans. Embrace the strange and love the weird. That’s all I can say.

The PlayStation 3 version has been out since the end of April, and a version for the Xbox 360 is expected to be released Halloween day, October 31, 2013.

Think of it as a Game of the Year edition that was released 3 years later.

Troy is the Features Editor at Brutal Gamer. When he's not writing about or playing video games, he's enjoying life with his wife and children. He also loves coffee. And lots of it.
Previous Anomaly 2 benchmark test results revealed
Next Batman: Arkham Origins Season Pass announced/detailed