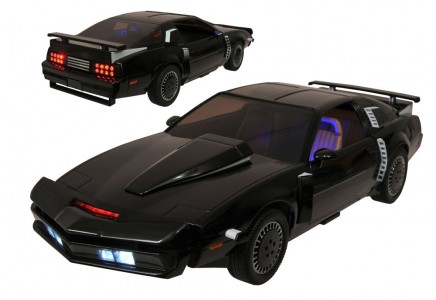 DST has maybe the most impressive stable of licenses I’ve ever seen. And it’s not limited to the big guys either as the Marvel Comics and The Walking Dead’s of the world are joined by niche stuff like Knight Rider. And that’s something that, as a big fan of the classic TV show in all its Hasslehoffy glory, I’m pretty happy about.

Seriously, how many companies have made cool Knight Rider stuff in the last… uh, whenever? Exactly. I mean, aside from that neat KITT and Michael Knight set from way back when, DST is the only company keeping the talking car genre in the public eye- and doing a darn good job of it too.

And now it occurs to me that I might be going on a little too much about the exploits of pre-sandwich (and pre-swim trunks for that matter) Dave, so without further delay here’s the newest and the coolest up for preorder from DST:

A Diamond Select Release! Super Pursuit Mode engaged! This 1/15 scale replica of the Knight Industries Two Thousand (KITT) from the popular TV show Knight Rider measures 14 inches long and features working lights and sound effects from the show, including the distinctive voice of KITT! This special SPM edition depicts KITT with all of his speed-enhancing gadgets extended, and includes exclusive SPM dialogue and sound effects! Get yours today, because they’ll go fast!

A Diamond Select Release! Sculpted by Oluf Hartvigson! One of the greatest Clone Commanders in the Empire’s history is memorialized as the newest vinyl bust bank from DST! Commander Thire (born CC-4477) commanded the Coruscant Guard, elite shock troopers that defended the capital and hunted down Separatists during the Clone Wars. This 8-inch vinyl bust bank features a detailed sculpt and paint, as well as a coin slot for inserting loose change.

A Diamond Select Release! It’s another high-quality Walking Dead product from DST! This 3.5-inch solid metal bottle opener depicts the collared head of one of Michonne’s pet zombies from the smash hit comic book series. Simply insert the end of a bottle in this zombie’s jawless mouth, and bottle caps will come off with ease! This opener also features magnets on the back for easy refrigerator door display.

A Diamond Select Release! Designed and Sculpted by Art Asylum! The newest incarnation of the Thunderbolts may be the deadliest team yet! This box set of four Minimates mini-figures draws from the latest Thunderbolts line-up, as seen in the current Marvel Now comic, and includes Deadpool, The Punisher, Elektra and Red Hulk, who can transform into General “Thunderbolt” Ross! Each Minimate stands 2 inches tall and includes a variety of interchangeable parts and accessories.

A Diamond Select Release! I find your lack of a bottle opener disturbing! Make sure you always have a way to open tasty beverages with this solid metal bottle opener, depicting the portrait of Darth Vader, Lord of the Sith! It measures 4 inches long, has magnets on the back and opens any bottle cap with ease. It’s an elegant tool for a more civilized age! Comes packaged in a collectors case with a full-color wrap.

A Diamond Select Release! No matter who you think the greatest captain of the Enterprise was, you have to give props to James T. Kirk. Tough, diplomatic, funny, charming… he was the total package! Set your love for Captain Kirk in stone with this this 7.5″ by 5.5″ slate plaque, painstakingly emblazoned with a full-color portrait of the legendary starship captain.Each Granix block comes with a display stand for shelf or desktop display.

A Diamond Select Release! Designed by Art Asylum! The end of days must be upon us, because Marvel Zombies Minimates are back! Just in time for Halloween ComicFest, DST and Art Asylum have zombified four already-frightening villains of the Marvel Universe: the Red Skull, the Green Goblin, Magneto and Galactus! Each Minimate stands 2 inches tall with a variety of interchangeable and decomposing parts. Packaged in a full-color window box.

Jason's been knee deep in videogames since he was but a lad. Cutting his teeth on the pixely glory that was the Atari 2600, he's been hack'n'slashing and shoot'em'uping ever since. Mainly an FPS and action guy, Jason enjoys the occasional well crafted title from every genre.
@jason_tas
Previous Avengers #18 (comics) Preview
Next Rockstar releases 11 new screens from Grand Theft Auto V