Sony aimed to douse the competition in their greatness. 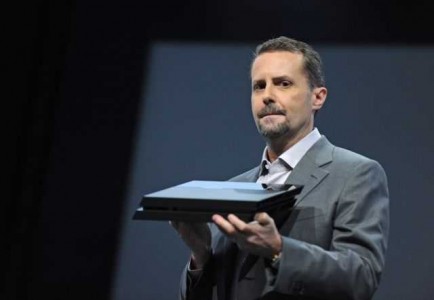 It was all eyes on Sony in the primetime spotlight last night. Microsoft has just shown off more of their next box, and Nintendo was nowhere to be found. This was a legitimate shot for Sony to pull ahead early in the next-gen market, and they delivered more haymakers than Mike Tyson on Punchout.

The conference started with Mr. Jack Tretton, looking as relaxed as ever, touching upon the PS Vita’s updated capabilities for the new platform, assuring that the PS Vita will pretty much bring the boom alongside the PS4. After Vita time, the world was treated to the final trailer for The Last of Us, which will be available this Friday. Also displayed was another trailer for Beyond: Two Souls, which showed more about the gameplay and story elements. Gran Turismo 6 also got some screen time, alongside Batman: Arkham Origins.

After all of this, however, the show truly began…

Ladies and gentlemen, what you see in the image is in fact the Playstation 4 console.

This beautiful piece of machinery resembles two PS2’s glued together, but everyone was eating it up. Raw.

Sony briefly spoke about their Video Unlimited and Music Unlimited services, along with expansions of existing applications such as Netflix and Redbox Instant. They told everyone basically that they exist, and not to become an extension of a cable box, but a great place to get content like nowhere else. After about five minutes of this, it was back to the games!

Exclusive PS4  titles came out swinging, leading off with a new IP, The Order: 1886. Afterwards, we were treated to a nice gameplay trailer for Killzone: Shadow Fall, and after that, Driveclub. Could it be a Forza killer? Lastly, well at least for the first set, we saw Infamous: Second Son, Knack, and The Dark Sorcerer’s blooper reel.

We seen a cornucopia  of indie titles on display last night as well, with Sony keeping their promise that indie developers will be safe with them to make maybe tiny “Game of the Year” titles! Speaking of which, new The Walking Dead: The Game episodes coming soon!

Diablo 3 has been confirmed for both the PS3 and the PS4, and will support offline play (thank goodness).

Final Fantasy XV is happening, and so is Kingdom Hearts 3, making the little boy inside of me scream as I type this.

After the JRPG freakout, Ubisoft titles took the stage with Assassin’s Creed 4, and Watch_Dogs, which looks absolutely breathtaking.

And then, we seen Lebron James’s face for the new NBA 2K title. That’s it for the sports games!

The Elder Scrolls Online will be having a beta on the next platform exclusively for the console side of things, which shows that Sony can dish out the cash for exclusive content as well, and Mad Max was announced. After all of this, the beatdown on Microsoft’s honor commenced…

Jack Tretton announced that the PS4 will support used games, with no restrictions. #PS4NoDRM worked gamers! He also went on to say that users will not be required to connect to the internet, nor do they need to go through a check-in process for validating games. Any PSN Plus accounts and content will carry over onto the next platform, and PSN Plus will be just under $5 a month.

The last game we were treated to was Destiny, the new IP from Bungie. The word around my circle is that this may be the Halo killer…

Gaikai is still going to happen, so virtual backwards compatibility is a go on their cloud service.

For everything PS4, Xbox One, Wii U and beyond, keep it locked here on Brutal Gamer!

Devon "Blank October" Williams is a student, a musician, and an online fighting game shoutcaster. He wants to break into the vast world of game journalism in a big way. Not to mention, he has a very distinct haircut.
Previous E3: Playstation 4 to support used games
Next E3: Bungie and Activision show off Destiny