Epic Mickey: Power of Illusion desperately wants you to like it as developer DreamRift push hard to capture the nostalgia of the 8-bit & 16-bit classics and update them with a touch of the new Epic Mickey franchise. One part is superb, the other is not…

Capturing the look and feel of truly classic games is never an easy task. Especially when those classics had the sort of love and exposure that Duck Tales on the NES, Aladdin and Mickey Mouse Castle of Illusion for the SNES/Megadrive had back in the day. Playing these games even now, as I do from time to time, they still hold up superbly. The Disney element of those titles was always just the icing on the cake. The games would have been hits without the Disney magic thanks to their great pacing, superbly weighty controls and general ingenuity/playability.

I’ve heard/read many a statement bemoaning the movement of Mickey Mouse in Epic Mickey: Power of Illusion. So many saying he’s sluggish to move, plods along, does large floaty jumps and seems to make only the briefest of attempts to comply with any sort of gravity. The thing I say to that is great! That’s exactly how those older titles controlled and developer Dreamrift have nailed it spot on in their updated telling. Mickey might not be as sprightly or pin-point accurate as Super Meat Boy or modern Mario but it never was. There’s a difference between deliberately paced action and a sluggish game – this has been paced to perfection.

In keeping with the Epic Mickey franchise we are dragged, as protagonist Mickey Mouse, back to help out new best pal Oswald the Rabbit when a mysterious castle appears in Wasteland. Said castle turns out to be the one from Mickey’s 16-bit adventures in Castle of Illusion. So he sets out to free the trapped Disney characters from Mizrabel, the witch holding them all captive in the castle. The story is as deep as it needs to be for an excuse to romp around the castle reliving the glory days and freeing a large cast of family favourites. 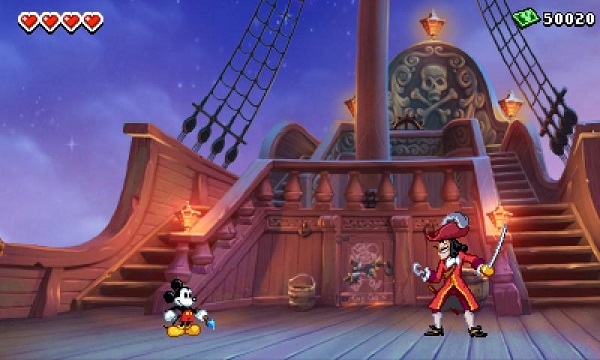 The game looks great, there’s no denying that. Capturing the vivid colours and attention to animation detail that helped make the 16-bit titles such classic the whole affair moves wonderfully. Turning up the 3D won’t give you too much of a headache and probably features some of the best implementation of the hardware’s 3D outside of a first party Nintendo release.

Likewise the music and effects are spot on. Crystal clear 16-bit inspired sounds help transport the nostalgic gamer back to those days whilst still sounding fresh for newcomers to the series. Musical score too has been well handled and offers some catchy tunes that complement the onscreen action well. These aren’t Mario level compositions but they’ll get stuck in your head soon enough.

What really pulls the game down though are three elements outside of the core platform gaming. Firstly, and least troublesome, is the game length. It could probably be completed by your average gamer in around five hours. This includes doing a lion’s share of the side-quests that freed characters give you. These quests can be as simple as talking to a character in the next room of your fortress or, and this leads in to my next gripe, a fetch quest.

Now fetch quests are all well and good, they serve a purpose. In this instance you might be asked to locate Scrooge McDuck’s lucky dime, or locate the picks of the Seven Dwarves. You then have to traipse back through levels looking for these items. In many cases you do exactly the same level and actions as you did before but this time the item(s) in question happen to turn up. It’s just frustrating, mind numbing and vapid. It also artificially elongates an already short game. 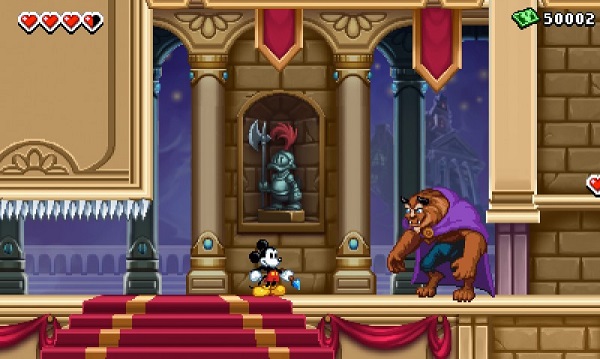 Those can be forgiven for the most part – the real issue lies in the poor way the Epic Mickey franchise influences have been introduced to Epic Mickey: Power of Illusion. To take on the paint & thinner the game simply gives you two “pots” to draw from. You then use these pots, along with you bum-stomp and whirlwind, to take down enemies in the world. So far so good then.

Whilst traversing each level though you are presented on the bottom screen with a parchment like backdrop with a outline of Mickey’s head moving along it. From time to time you will see the outline of an object. This object might be something in the world blocking your path or something useful like a cannon or moving platform. You then have to tap the bottom screen (or press Y) to enter a suspended state. Here you can press on the object and either trace it’s outline (using paint) or, if it’s something blocking your path, trace over the whole object using thinner. This might not sound like a big deal but it ruins the momentum, causes the dreaded fuzzy eyes from looking from the non-3D to the 3D screen and become tedious due to limited paint/thinner supplies. If you don’t trace the object well then you run out of thinner and have to either wait for the stored levels to raise over time or go hunting for paint brush drops in the level.

The main crime here is the monotony of tracing these similar objects constantly and the break in the games flow they cause. The game is progressing well, you’re enjoying the spot-on interpretation of those 16-bit classic… then you have to stop, trace an object, mess it up, try again, hunt for thinner … It just drags the whole process down.

Younger gamers probably just won’t care about these things. Instead they will just soak up the Disney characters and all round glorious visuals. The challenge is perfectly pitched so that two thirds of the game is easily completed by even the most modest gamer. The last third starts to layer in the challenges and mechanics superbly to make a nice meaty challenge come the game end.

Epic Mickey: Power of illusion is a great 16-bit era platformer. Truly a job well done for the team at DreamRift. The game looks great, moves as you’d expect, sounds like you’d expect and offers nostalgia for Disney fans and lovers of those old Megadrive/SNES titles.

It’s then such a shame that adding in the Epic Mickey elements to the title have dragged down what could have been a classic platformer in its own right. The terrible tracing and painting mechanic. The monotony of the side-quests. The repeated visits to the same levels and short length all hamper what could have been the game to finally make good on the Epic Mickey name and give Disney that much needed videogame hit.

Younger gamers, the abhorrently names Millennials, will have no problems enjoying this game. Younger gamers will lap up the Disney characters, bright and well realised visuals and simple, yet challenging game play. Older gamers might find it a little too frustrating in places but will at least get a kick out of the well created platforming sections. Those looking to play the true sequel to Mickey Mouse Castle of Illusion will be both delighted and frustrated at how close they came to getting this right.

Epic Mickey: Power of Illusion is the best incarnation of Epic Mickey out this season and one of the better platform titles to come onto the 3DS – that’s a backhanded compliment I know given the software support for the system right now & the lacklustre reception for Epic Mickey: The Power of Two.

Zeth is our EU Senior Editor and has been writing about video games since he joined BG back in 2008. He's pretty old and has been a gamer since he played Space Invaders as a young boy in the 80's. His genre tastes lean towards platformers, point-and-click adventure, action-adventure and shooters but he'll turn his hand to anything.
Previous Epic Mickey The Power of Two (PS3) Review
Next The Last of Us’ new trailer explores apocalyptic back-story