1931: Scheherazade at the Library of Pergamum (PC) Review 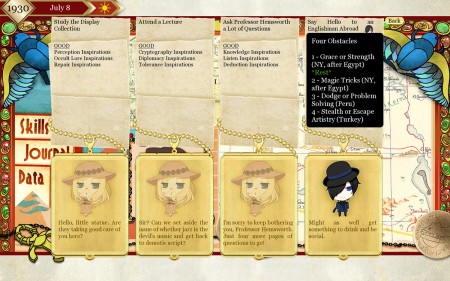 We are just going to go with Scheherazade for the sake of brevity.

Scheherazade is part adventure game, part RPG, and part theatre of the mind. A sort of choose your own adventure book with stats.

The game follows the adventures Scheherazade or “Sadie” which the player can direct by making choices. What choices are made in responses to the various situations define your personality and contribute to Sadie’s ultimate destiny. She begins attempting to assemble her graduation outfit and is quickly tossed into a trek across the globe to track down her missing parents and along the way will encounter an intriguing cast of characters. 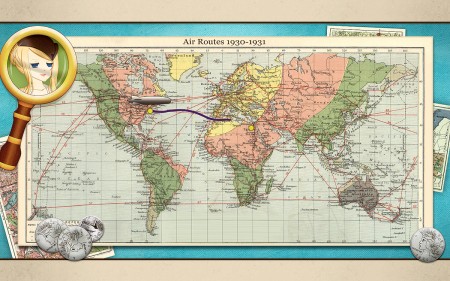 With 44,369 screens of dialogue, 50 story arcs, and 11 different endings, choices are aplenty.

Players will also need to make choices around Sadie’s stats. She has stats like wit, charm, athletics, and relationships with other characters in the game. Players can boost Sadies stats by training and by the certain choices they make. Stats will come into play during relationship building and mounting challenges that are presented during the course of the game. IF you are presented with something to climb for instance, you can do it yourself if you have a high enough athletic stat or you can persuade someone to do it for you if your relationship stat is high enough. You can also get modifiers called “inspirations” to help you along. 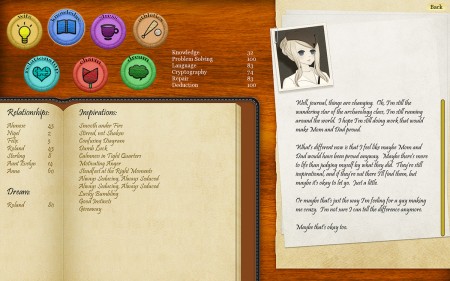 The story takes place in 1931 (as you may have guessed from the title) and follows our hereon as she first attempts to put together her high school graduation outfit to tracking her missing family across the globe.

The story and adventure aspects of the game are intriguing and presented well. I’m not much for relationship building but those aspects are also done well. The graphics are pleasant and give the game a virtual story book look.

When taken separately, those aspects are fine but when placed on the canvas of the overall game, it comes out as more of a Picasso than a Rembrandt. The skill system is a nice touch but needs to be explained a bit more and more fleshed out. The inspirations help but feel a bit tacked on. Relationships can be complicated and that’s ok, but I felt directed at times toward one choice or another. Those times could be a result of previous choices but the fact that I was never sure either speaks to my ignorance or the game’s shortcomings. 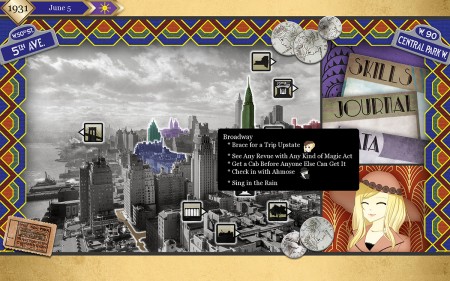 The many mechanics in the game do more to detract from the game’s strengths instead of highlighting them.

There is a clever tutorial system but I found that it does not go far enough to explain new mechanics as they come up. There is no way to go back over the tutorials once they pass. I found out the hard way after restarting the game after an inadvertent click. They also tend to expound on trivial items while they let some more important aspects go untutorialed.

Guiding Sadie through her adventures and watching the various stories play out with beautiful visuals is rewarding but it’s hard to watch the game struggles to take flight against the gravity of its mechanics. 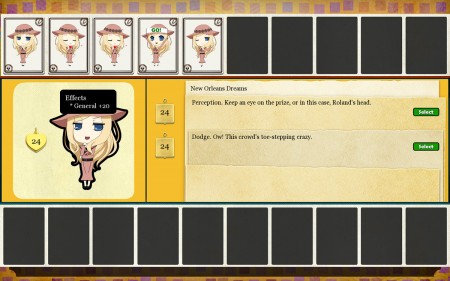 Tags 1931: Scheherazade at the Library of Pergamum desura