The Brood have been one of the more ghoulish X-Men villains over the years and Minimate series 47 (!) is all about the little buggers.

I don’t think it’s too big of a stretch to say that the Brood are, shall we say, reminiscent of the Xenomorphs from the Aliens films?

As far as comic book baddies go, they always creeped me out too. When a host is infected by a Brood egg, their DNA is rewritten and they actually become one of the horrible little parasites. That’s arguably a more horrible fate than having your chest busted open.

Series 47 of Diamond Select’s Marvel Minimates focuses on a particular classic Brood/X-Men tale where Wolverine is (temporarily) infected. As you can probably imagine, that doesn’t go all that well for the Brood. That Wolverine, he’s wacky. 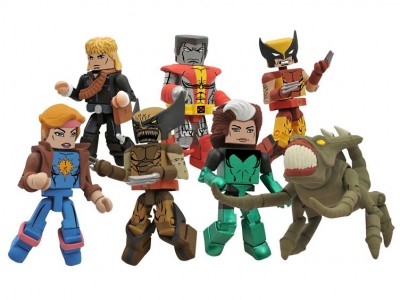 Marvel Minimates Series 47: X-Men vs. Brood
Mutants and humanity have had their differences, but they have a mutual enemy: the Brood! This interstellar race of parasites has preyed on men and X-Men alike, and this wave of At Asylum-designed Marvel Minimates includes three all-new comic-based two-packs: Rogue with Colossus, Longshot with Dazzler, and Wolverine with a Brood, plus a rare, one-per-case variant where Wolverine has been infected by a Brood egg! Each Minimate stands 2 inches tall with 14 points of articulation and a variety of removable and interchangeable parts and accessories. The figures in this assortment will only be available in comic shops and specialty stores, so don’t miss out! Designed by Art Asylum!

That Minimate Brood… pretty much a must buy? Yeah, I think so.

Jason's been knee deep in videogames since he was but a lad. Cutting his teeth on the pixely glory that was the Atari 2600, he's been hack'n'slashing and shoot'em'uping ever since. Mainly an FPS and action guy, Jason enjoys the occasional well crafted title from every genre.
@jason_tas
Previous Valiant Comics unveils pen and paper cover to Harbinger #8
Next 1931: Scheherazade at the Library of Pergamum (PC) Review