Master Chief is my DJ

iHeartRadio has officially launched Master Chief Radio. So what exactly does the man in the Mjolnir suit listen too anyway? (and does it have built in speakers?) 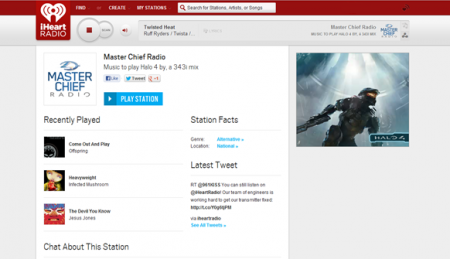 Actually, the new radio station has less to do with John 117 and more to do with Halo 4’s developer, 343 Industries. All the tunes played on the station will be the music that was cranking in the devs offices as they put the actual game through it’s development paces.

Beginning today, Oct. 11, “Master Chief Radio” is available on iHeartRadio through the Xbox LIVE app, iHeartRadio.com and the iHeartRadio mobile app. iHeartRadio on Xbox LIVE is a free, all-in-one digital radio app that lets you listen to more than 1,500 of the nation’s most popular live broadcast and digital-only radio stations from 150 cities, plus user-created custom stations from a catalogue of 14 million songs and 400,000 artists.

Jason's been knee deep in videogames since he was but a lad. Cutting his teeth on the pixely glory that was the Atari 2600, he's been hack'n'slashing and shoot'em'uping ever since. Mainly an FPS and action guy, Jason enjoys the occasional well crafted title from every genre.
@jason_tas
Previous Dark Horse continues Buffy the Vampire Slayer with season 9
Next NBA 2K13 sees massive rise in sales in face of no competition