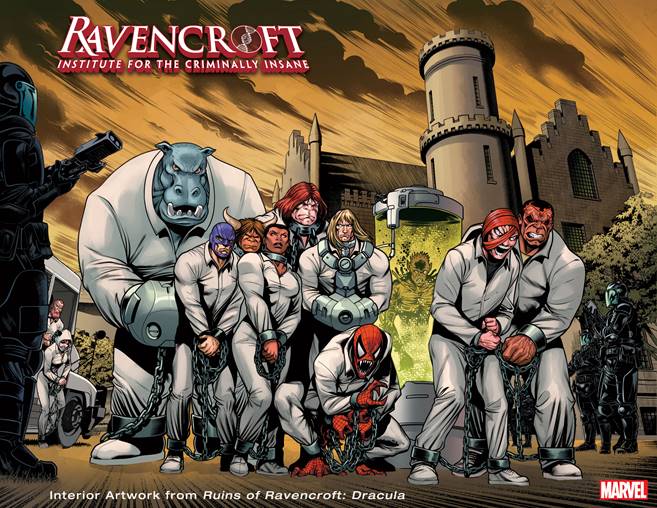 Home / Comics / Marvel’s Ravencroft: Sabertooth gets a preview and more

Marvel’s Ravencroft: Sabertooth gets a preview and more

Delving into the nature of evil itself in the Marvel Universe is the publisher’s new set of Ravencroft one-shots and forthcoming miniseries.

Marvel is promising a lot with everything that’ll be hitting retail under Ravencroft banner. Yes, I know it’s a somewhat minor event, and not really all that studded with star-power. But stay with me here, because Ravencroft sounds like the opposite of much of what Marvel has been doing.

While there’ve been serious moments, Marvel has had a much more lighthearted take overall to its stories than it has in past eras. Ravencroft though, sounds like it could be as dark as anything they’ve done.

Starting things off is a series of one-shots including Carnage, Sabertooth, and Dracula. After that will be a five issue miniseries, one that Marvel says will figure into some larger plans later on.

“These diabolical history lessons lead us to our five issue series, RAVENCROFT where we deal with Ravencroft’s PRESENT. Expect plenty of twists and turns and some really %^&*ed up surprises… and that’s not even me mentioning the VERY shocking prisoner who occupies Cell 616. And I’ll just let fans make of that what they will in the meantime…”

And while you’re here, you might as well check out a preview of the upcoming Ravencroft: Sabertooth. It comes complete with an extremely disturbing Wolverine cameo…

Jason's been knee deep in videogames since he was but a lad. Cutting his teeth on the pixely glory that was the Atari 2600, he's been hack'n'slashing and shoot'em'uping ever since. Mainly an FPS and action guy, Jason enjoys the occasional well crafted title from every genre.
@jason_tas
Previous Two new Sega Ages hitting Switch this month
Next Nintendo kicks off 2020 with a pretty great eShop sale