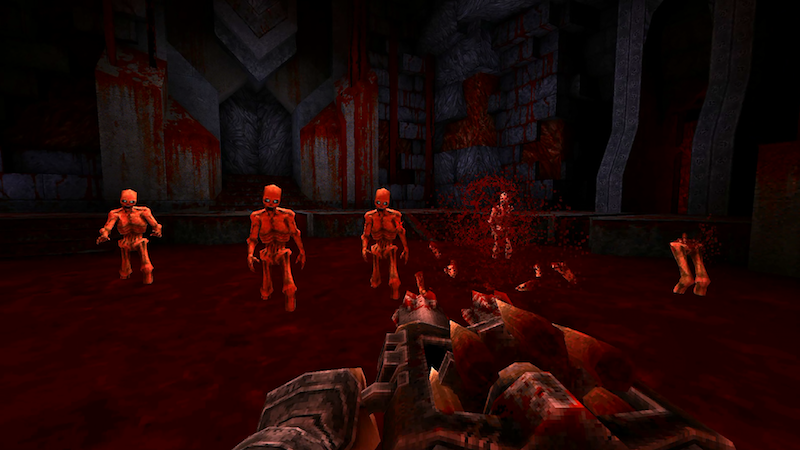 3D Realm’s latest retro-themed FPS is a trip into the demonic world of Wrath: Aeon of Ruin. Monsters, blood and gore, and gibs galore.

Very quietly, 3D Realms has been producing some of the most purely fun FPS’ around. Not that long ago, we got the awesome Ion Fury, and now it’s time for Wrath, from KillPixel Games.

The game transports players into a universe loaded up with demons, monsters, and more gibs than you can shake a boom stick at. And as of right now, it’s available on Steam’s Early Access.

Once adrift upon the Ageless Sea, Outlander finds himself on the shores of a dying world.  A radiant figure draped in white, the Shepherd of Wayward Souls, burdens Outlander with a harrowing task: journey into the sprawling gloom and slay the fallen Guardians who have plunged this world into darkness.

WRATH launches in Early Access with the first of three non-linear Hub worlds and two unlocked levels. Annihilate the horrors lurking within the ruins of the Old World with an arsenal of devastating weaponry and mystical artifacts. Early Access will continue to receive content updates that add even more levels, enemies, weapons, artifacts and music by Quake Champions composer Andrew Hulshult.

If you’re a 90s FPS fan, it’s tough not to like what 3D Realms is showing off. Quite frankly, Wrath looks like it’d be right at home in 1997. And while this is just the first playable look at the game, you can definitely get a solid taste for what’s coming up here.

The actual finished product will be hitting some time next year, along with both PS4 and Xbox One editions. As for the Early Access PC game, that’ll cost you $24.99 USD.

Jason's been knee deep in videogames since he was but a lad. Cutting his teeth on the pixely glory that was the Atari 2600, he's been hack'n'slashing and shoot'em'uping ever since. Mainly an FPS and action guy, Jason enjoys the occasional well crafted title from every genre.
@jason_tas
Previous Here’s that Half-Life: Alyx trailer from this weekend
Next Udon’s Mega Man: Robot Master Field Guide gets hardcover edition in 2020