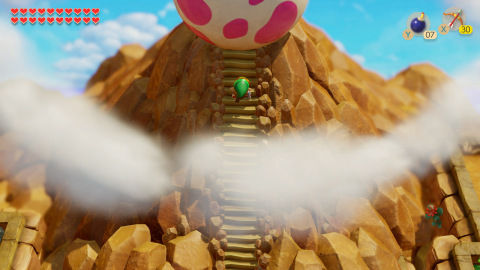 Yeah, we’re late again with this feature, but it’s still worth talking about how absolutely glorious The Legend of Zelda: Link’s Awakening is.

Since we seem to be incapable of getting these posted on time, maybe we should rename them to ‘BG’s game of two months ago’. Regardless though, September 2019 brought it, with some massive games that we can’t not talk about.

Chief among them was our Game of the Month. A reinvention of a portable classic, this title brought back the iconic Nintendo adventuring of a bygone age, and made it feel new again…

Game of the Month: September 2019 – The Legend of Zelda: Link’s Awakening

Link’s Awakening is a total updating of a Gameboy game from 1993. Unlike that original game though, this new update offered some spectacularly modern graphics.

Though even with the visual revamp, Nintendo still kept that classic Zelda feel. Link’s Awakening played out in 3/4 view, with all of the gameplay that you’d expect to be there, completely intact.

Can a vintage game be remade for modern audiences and feel fresh? You better believe it can.

Unlike most months, we had a few runners up in September. It just goes to show how many big titles saw release. None managed to capture the gold, since Link’s Awakening won by a single vote over the second place finisher.

Nonetheless, the following all deserve nods.

Jason's been knee deep in videogames since he was but a lad. Cutting his teeth on the pixely glory that was the Atari 2600, he's been hack'n'slashing and shoot'em'uping ever since. Mainly an FPS and action guy, Jason enjoys the occasional well crafted title from every genre.
@jason_tas
Previous TMNT spinoff “Jennika” coming from IDW in 2020
Next New Wolfenstein Youngblood update brings new mission and more