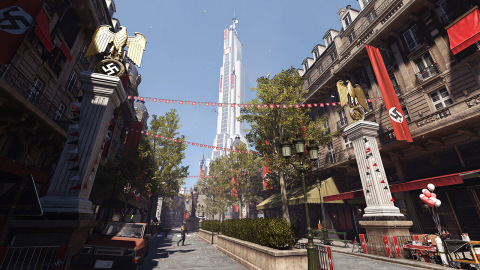 Bethesda has updated Wolfenstein Youngblood once again, this time with another new mission, a new mission type, and fresh abilities and enemies.

As Wolf games go, Wolfenstein Youngblood was not quite the blockbusters FPS that you’d expect from the series. Nonetheless, it was a solid game in its own right. It’s also a game that kind of fills in the gap between part 2 and the surely forthcoming part 3.

Youngblood forwards time from the 60s era of the original game to the 80s. Though, as you might’ve figured, it’s hardly the 80s that you know and love. The Wolf universe might have a liberated US, but that’s about it, as enemy forces still run roughshod over the whole of Europe, and really the rest of the world.

Of course, that’s where Youngblood sends players, but not as an older version of series hero BJ, but instead as his twin daughters. Made with a focus on co-op play, Youngblood is also perfectly playable as a single player affair, and a pretty fun time aside from some slight issues.

Bethesda has been dutifully updating the game post-launch too, with a series of additions. The latest patch adds in a bunch of fresh elements, including new bad guys to combat, new powers to use, and more.

Have a peek at what’s new:

Patch 1.0.7 is live now for all versions of Wolfenstein Youngblood. You can check out the full notes on it here.

Jason's been knee deep in videogames since he was but a lad. Cutting his teeth on the pixely glory that was the Atari 2600, he's been hack'n'slashing and shoot'em'uping ever since. Mainly an FPS and action guy, Jason enjoys the occasional well crafted title from every genre.
@jason_tas
Previous BG’s Game of the Month for September 2019 is Link’s Awakening
Next Call of Duty: Modern Warfare (Xbox One) Review