This summer is a big one for comics in general. For their part, DC Comics will be diving into new eras for Superman, but also the Justice League. For their premier super-team, that means top notch talent and a new lineup that includes an old (green) friend.

The main headline the last few months, as goes DC Comics, has been writer Brian Michael Bendis heading to Superman. Bendis will be running both of the Man of Steel’s monthly series’ and also bringing back the classic Superman costume, trunks and all.

While that’s pretty big news, slipping by has been something just as cool. Namely that, fresh off of Metal, Scott Snyder is taking over Justice League. The fan-favorite Batman scribe is a force in DC, penning many of the publisher’s best books and crossovers. The guy is good – period. And to get him on League is a big deal, to say the least.

Now there’s a good deal more to share about the shake-up too, including the fact that we’re going to be looking at a fresh #1. I’m not wild about that, since I’m one of those fans who likes seeing deep-numbered runs, but this is still something I can get behind without a second thought.

Snyder is a big part of that, but so are artists Jim Cheung and Jorge Jiménez. But maybe even cooler than the creative team is one of the new additions to this version of the League – Martian Manhunter. A legendary team member and DC hero in general, it’s been entirely too long since J’onn has been a Leaguer.

I had a feeling that we’d be seeing a lot more of him after his appearance in Metal, and I’m glad I was right. Count me in on day one for this new book.

Here’s a hint as to what you’ll be seeing in the first arc, as well as quotes from the team: 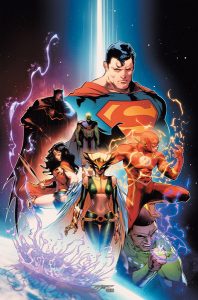 “I am extremely honored, and happy, to be able to launch JUSTICE LEAGUE with Scott and Jorge,” says Cheung about headlining the new series. “It has been many years since I’ve had the pleasure of working at DC, but when Scott first mentioned this opportunity, I knew I couldn’t say no. His energy and excitement has been infectious, and I can’t wait to share what we have in store! I can’t think of a more perfect book to return to DC on! These characters are ones that I grew up loving, and the prospect of being able to leave my mark on them, leaves me thrilled.”

Shipping biweekly, in JUSTICE LEAGUE #2 on June 20 by Snyder and Jiménez, the League is faced with an impossible decision…and now they must face the consequences! While Martian Manhunter and Batman attempt to recruit an old ally back into the fold, The Flash and Hawkgirl are blindsided by new challenges that could rewrite their mythologies!

“Working on JUSTICE LEAGUE is probably the most exciting opportunity I’ve ever had in my career,” says Jiménez. “I feel more than ever that this is my moment! I have in my hands a script written by the incredible Scott Snyder starring most important DC characters–Superman, Wonder Woman, and Batman! Even better, I have the hyper-mega-talented Jim Cheung beside me! I can’t ask for more!”

“Justice League has been the golden ring for me since I came to DC,” says Snyder. “The story I have planned is something I’ve been building towards through DARK NIGHTS: METAL and I can’t wait to tell it in the biggest way possible. And to have mega star Jim Cheung as one partner, and rising superstar Jorge Jimenez as my other partner, I’m just thrilled to get to work!”

Jason's been knee deep in videogames since he was but a lad. Cutting his teeth on the pixely glory that was the Atari 2600, he's been hack'n'slashing and shoot'em'uping ever since. Mainly an FPS and action guy, Jason enjoys the occasional well crafted title from every genre.
@jason_tas
Previous New Nindies to include Mark of the Ninja, Lumines, Banner Saga 3, and more
Next PC classic Titan Quest lands on consoles, Switch version incoming