After ‘Cometh the Hour’, Varvara has grand plans. How will Liz, Ashley and their team handle the beasts and burdens that are coming their way? Grab BPRD The Devil You Know #1 today. 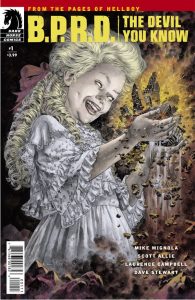 The Devil You Know

We find ourselves in Parkinson, North Carolina. One of the BPRD agents faced with an unnatural beast the size of a 5-story building. Using a car door as a shield, he is able to impale the beast, and get away relatively unscathed. Little does he know, that the team has lost communication, and everyone is on their own at present.

Liz is flying along a BPRD command ship when they realize that one of the Ogdru they are dealing with, is responsible for blocking the signals. Before command can finish explaining the experience, Liz is gone. She’s taken off to check on her teammates.

Agent Ashley Strode is performing an exorcism in a small town. This one is taking a turn for the unexpected. The dark spirit possessing the man in question addresses Ashley by name. He cries to be released, so that he may be part of a new kingdom. A kingdom let by a little girl. He then slumps back into his bed. Ashley consoles the family, before calling this incident into BPRD command. Something is clearly out of the ordinary.

Liz is checking in on her comrades on the front line. The troops are not in the best of moods. No contact with command. Searching for what seems to be a needle in a haystack. They find something, even more than what they expected to come across.

It takes fully-automatic firepower and flamethrowers for them to deal with the assortment they find. This too was not without its price. The team loses one of their own in the fray.

Once the dust settles, Liz locates the vehicle that the team was dispatched after. Vehicles are nothing but husks at this point. One has been turned into what looks like a nest for the vile Ogdru they are facing down. What are they walking into?

If that’s not crazy enough, we find the embalmed head of one named Herman and a man in what appears to be a black rubber suit and a gas mask. Discussing how they have missed their chance, and life has passed them by. All they have now is to watch the clock run out.

The strange little Russian girl we have been seeing in the last few issues has shown up again. She strikes up a chilling conversation with the two men stranded on the highway. She has amassed a following, and has a plan in mind. Goodness knows what she has in store for the world. We will have to wait for The Devil You know #2 to learn more about her sinister ideas.

This issue was a bit difficult for me to get through, personally. Several stories jumbled across different locations, including a dream sequence. I have no doubt that I am in the minority here, but I don’t care for stories that jump around this much. Mignola knows where he’s going with this arc, we’ll just have to wait and see how it all comes together.

BPRD The Devil You Know #1

The BPRD are spread thin and working hard. I wouldn't envy Liz Sherman or any other agent with what they are facing here. They are going to have to pull together if they want to stand a chance against the mysterious little girl with grand plans.

A fan of media on multiple platforms, I am always watching or playing something! Who knows what I will be on to next?
@mackeyp42
Previous Homecoming Spidey joins Mezco’s One:12, goes up for pre-order
Next Deep Silver announced as publisher for Shenmue 3