The circle is complete and the Clone Saga is once again having major repercussions on the Amazing Spider-Man. Yes, the original Scarlet Spider is back.

A Spider in Scarlet

This April, one of the most controversial characters in Marvel history returns to don the mask (and hoodie!) once more. Today, Marvel is pleased to announce BEN REILLY: THE SCARLET SPIDER #1 – the new series from New York Times Bestselling creators Peter David (Amazing Spider-Man, Spider-Man 2099) and Mark Bagley (Ultimate Spider-Man, All-New X-Men)! That’s right, Ben Reilly is webslinging his way back into comic shops everywhere later this year and he’s bringing two of the most accomplished & beloved Spider-Man creators of all-time with him! Only question is – will it be as a hero…or a villain?

It was the twist that shocked the world. Ben Reilly had returned, but not as he once was. Twisted and manipulated by the villainous Jackal, the fallen clone is out to break the cycle, and reclaim his destiny. Not as Peter Parker’s clone – but as his own man. Will suiting up once more as the Scarlet Spider be enough to outrun his personal demons? All while being able to stay one step ahead of the man hunting him – Kaine Parker – the former Scarlet Spider?!

“This book is not your usual Spider-Fare,” says Executive Editor, VP of Content & Digital Publishing Nick Lowe. “Peter David and Mark Bagley are taking this character into uncharted territory that’s both rip-roaring and troubling.”

His old life is over. It’s time for a new beginning. But can you ever truly outrun your past? Find out as the iconic fan-favorite character returns to the fore once again in BEN REILLY: THE SCARLET SPIDER #1 – coming this April! 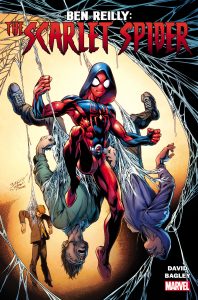 Yes, really. If you haven’t been reading Spidey’s comics as of late, then this is all senseless to you. So here’s the thing – Ben has indeed returned. He was a key player in the Clone Conspiracy crossover event that just concluded actually. Maybe even the central figure. And now it appears as though he’ll be back in heroic circles as a new Scarlet Spider. And I see that another former Spidey will be playing into this one as well, as Kaine will be hunting Ben to kick off the run.

Now personally, and I know I’m in the minority on this, but I always liked the Ben character. I can’t say I loved the original Clone Saga, though I didn’t hate it either, and Ben was a nice side-effect for me. Well, for a while anyway. In any event, I kind of dig that he’s back. I actually would have had him return long ago, and slotted him in as “Superior Spider-Man” instead of the Doc Ock/mind control story arc. I always thought that would have been a cool twist.

Bottom line- I dig this. And I’m looking forward to seeing what David and Bagley (two of my faves) are cooking up. But whether or not this one will be well-received by the reading-public at large remains to be seen. I mean, the whole thing has kind of become a jokey-meme, seeing as very few people like the whole ‘clone’ deal. And I mean that in the 90s sense and with this run for it.

We’ll see soon enough though I guess, since issue number one hits in April.

Jason's been knee deep in videogames since he was but a lad. Cutting his teeth on the pixely glory that was the Atari 2600, he's been hack'n'slashing and shoot'em'uping ever since. Mainly an FPS and action guy, Jason enjoys the occasional well crafted title from every genre.
@jason_tas
Previous Funko x Playmobil results in all the coolness that you’d expect
Next THQ Nordic to publish physical Halo Wars 2 on Windows