The Walking Dead Recap 703 “The Cell”

Another Sunday night means that we get another episode of The Walking Dead. Was this one up to the standards set by the first two episodes this season? I am going to give that one a “yes” as we travel into Negan’s compound.

The episode focuses on Daryl (Norman Reedus) after he was taken to Negan’s (Jeffrey Dean Morgan) compound after the season premier. We don’t get our first glimpse of Daryl for a bit though. First, we get to see Dwight (Austin Amelio) going about his daily business. This includes watching taped reruns of “Who’s the Boss?” and taking things from other survivors who broke rules and were beaten to death, Then, the fun stops.

Dwight makes a dog food sandwich and brings it to Daryl. We are also introduced to this masterpiece:

This plays on repeat, through basically the entire episode whenever Daryl is getting brought food. In the interest of full disclosure, I listened to this on repeat throughout the writing of this recap. If it drove me crazy, I can’t imagine what it did to a naked Daryl after he was in this cell for such a long time. 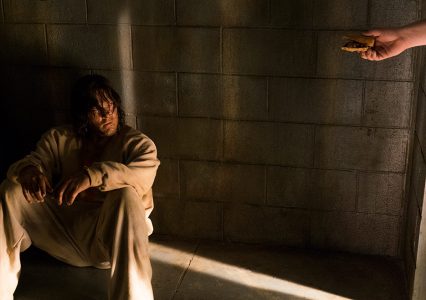 Trying not to harp on that, before too long, Dwight comes and gets Daryl to get him examined by a doctor. At the office, the two run into Sherry (Christine Evangelista), who was getting a pregnancy test. She assures Dwight it was negative, and Daryl, in his fresh clothes adorned with a large, sloppy “A.”

The majority of this episode, for Daryl, consists of Dwight and other saviors trying to break him. Dwight starts throwing his dog food sandwiches at him, and showing him the defense fence that is lines with walkers. To keep Daryl in line, they keep threatening to put him on the wall as a walker.

We get a one on one between Negan and Dwight, where Negan offers Dwight a “go” at one of the women in the compound, assuming that woman consents. When Dwight declines, Negan begins asking whats wrong with him, and telling him he doesn’t need to do grunt work. Dwight responds that he enjoys the grunt work.

We go along with Dwight to catch someone who escaped. After a close call and an injury, Dwight catches up with the man. A brief exchange has Dwight threatening him, and him saying he doesn’t care and wants to die. A few moments later, and Dwight wins. Walking back, Dwight shoots him anyway. We later see him on the wall as a walker.

Sherry and Daryl have a few dangerous moments, where she apologizes for stealing his things with Dwight, an exchange from last season. Daryl tries to escape, and is quickly surrounded by Negan and his men. Negan feints a Lucille attack, and tries to drive home the message that Daryl better get on message. 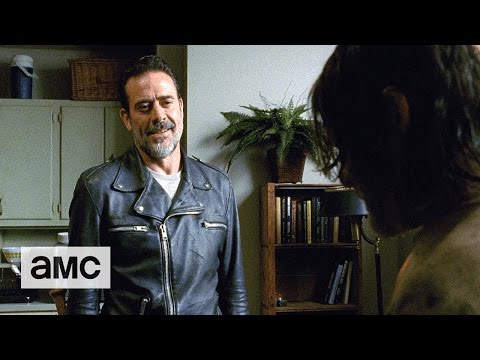 At the end of the episode, Negan has Dwight bring Daryl into his personal room and tries to offer Daryl a place amongst his most trusted men. Negan asks Daryl who he is. (The correct answer is “Negan.”) And Daryl affirms that he is indeed Daryl still.

We also learn how Sherry and Dwight, who used to be married were separated, and how Dwight’s face got all burned up. Sherry married Negan to save Dwight’s life, and Negan still punished him (for the duo’s previous escape), by ironing his head.

This was another strong episode. I personally enjoyed the look into Negan and the savior’s compound. We also get to see more into Dwight and Negan’s character. They aren’t inhuman scum. Dwight has actual problems carrying out Negan’s orders, and Negan refuses to allow any type of violence towards women. He may have 20 wives, but they all consent.

This was a strong episode, and next week’s should be just as strong. A 90-minute return to Alexandria, where we will surely see Rick trying to reconcile what transpired nearly two weeks ago.

And so, as Negan might ask; “Are we pissing out pants, yet?”

Erich was introduced to gaming by his grandfather before he could walk. Since then, he has grown up loving Nintendo and most games in general. He couples his love of videogames with journalism to cover news, provide reviews and tell it how it is in the gaming world.
Previous Mean Streets of Gadgetzan Announced for Hearthstone
Next The Seven Blades of Master Darque begins in the pages of Ninjak