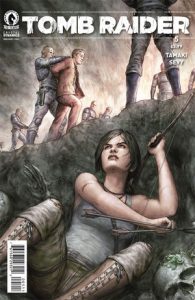 Issue #5 of Tomb Raider was an action packed read within 22 pages. I was pretty new coming into Dark Horse’s foray into Lara Croft’s world in the comic realm but I was not disappointed. Writer Mariko Tamaki has a great sense of the Tomb Raider world and keeps Lara’s inner dialogue fairly conservative. You only get to see quick glimpses of what Lara is thinking but I think this specifically works as it shows her off more as a woman of action then one who overthinks everything. The action was great and left with a cliffhanger that made me want more.

The Tomb Raider comic series itself takes place after the Rise of the Tomb Raider video game that was released in 2015. At this point, we already have a battle hardened Lara Croft who is all action, doesn’t hesitate to take an enemy life and does it efficiently; like a female Jason Bourne. The beginning of the issue starts with a flashback to an archaeological dig site where it seems there are looking for some kind of mushroom. It also establishes a male grad student who seems to be awkward and is thought as such by the others at the dig site. The grad student being our focus in the issue as it thrusts us into present day and he is now a Professor leading a shady group of individuals who are looking for something all the while trying to get rid of the Tomb Raider herself, Lara Croft.

Lara is seen traversing the cave system where they all happen to be in. She is a lot more fluid in her movements then I remember from the video games where I felt she happened to be falling everywhere (though, she does take some death defying leaps in this issue as well) and you can really get a sense of her maturity and resolve. I don’t want to spoil anything within the issue for all potential readers out there but know that this tomb raider is not one to be trifled with. She is fast, resolute and an all around badass. The issue leaves us with a lot of questions centered around where Lara will go from here, what is this Professor’s endgame and who are this men in black that are trying to find this mysterious spore?

I enjoyed Issue #5 and look forward to going through the rest of the series as it becomes available. Dark Horse currently has the issue for pre-order on their site for $3.99 and you can also preview a couple of the pages to see if it grabs your attention. If you haven’t begun reading this series and are a fan of Tomb Raider, I absolutely suggest giving this series a shot. The art by Phillip Sevy and colors by Michael Atiyeh is fantastic and I enjoyed the overall feel and look of the issue. Either way, stop reading this review and start reading Tomb Raider. You will not be disappointed. Issue #5 will be released June 22nd.

This is one to check out!

Solid action, great script and leaves you with questions you want answered. If they were going for "Leave the audience wanting more", they succeeded with Issue #5.

I am an avid gamer and have been since a wee cub. I cut my teeth on fighting androids in the year 20XX (Mega Man), stomping on Goomba's (Mario Bros.) and taking a punch to the face (Street Fighter II Turbo). I still play to this day and am a MAJOR adventure gamer. Single player games are my bread and butter; this is where I spend most of my time, though I have been known to pour a ridiculous amount of hours on Destiny. Damn you, Bungie!!! I love all games from pixelated to Unreal Engine smoothness.
Previous Injustice 2 gameplay revealed
Next Brutal Roundup: Pre-E3