Udon prints some of the coolest comics based on Capcom’s Street Fighter franchise that’ve ever hit the racks, while Visionborne makes digital comics do all kinds of stuff that print books don’t. add the two together and you’ve got Street Fighter Origin: Akuma. 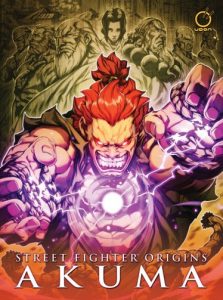 “We are really impressed with the atmospheric effects that Visionborn can apply to comics.” Says Erik Ko, founder of UDON Entertainment and publisher of the Street Fighter comics’ franchise. “It works perfectly in the world of Street Fighter and does a brilliant job of capturing the intensity of each scene.”

“With our technology, we ultimately wanted to create something new, engaging and dynamic for the world of comics.  We love the Street Fighter adventures and we are tremendously pleased to bring them to life as Visionbooks” remarks Visionbooks co-founder, Francesco Scrufari.

The series tells the story of one of the Street Fighter franchise’s baddest villains, the demonic warrior known as Akuma in the west. The character’s history has never really been laid out for all to see in any real way, so it’s pretty cool, and knowing publisher Udon, probably loaded up with awesome artwork as well. And not stopping at just a regular old comic release for the series, the company has teamed with Visionborne to produce a Visionbooks variant of it.

Visionbooks uses 3D digital animation to bring comic pages to life, with in-panel movement and “special effects enhancements you would normally expect from blockbuster movies”. Sounds fitting for Street Fighter. The line is making it’s Visionbooks debut with Akuma, and though nothing is being talked about quite yet, I have to imagine that there might be more to come depending on this one’s performance.

No release date as of yet for this one, but keep an eye out, Street Fighter Origins: Akuma should be available some time soon.

Jason's been knee deep in videogames since he was but a lad. Cutting his teeth on the pixely glory that was the Atari 2600, he's been hack'n'slashing and shoot'em'uping ever since. Mainly an FPS and action guy, Jason enjoys the occasional well crafted title from every genre.
@jason_tas
Previous Dark Horse sets off Black Friday conflagration of deals
Next Pee-Wee 30Th Anniversary: An Interview with actress and singer E.G. Daily