Celebrating the future of the Dynamite brand, as well as the tremendous history of the Spirit, Dynamite Comics has a pair of panels ready to go for Comic Con 2015. 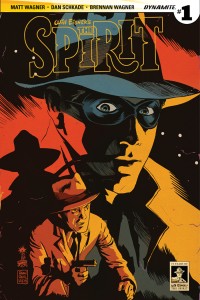 If you’re a Spirit fan, then you don’t want to miss out on the Spirit 75th Anniversary Panel, taking place this Friday at the biggest Con of the year in San Diego, CA. The presentation will have all manner of special guests including current series writer – Matt Wagner of Grendel. That’s going to be a big one.

Also set for the show is a panel looking forward to the next decade of Dynamite offerings. The publisher will have a bunch of talent on hand for this one, like Gail Simone (who you’ve got to know from somewhere- including her incredible run on Batgirl) and David Gonzalez, the creator of Homies. Actually, there’ll be a nice little giveaway for this one too, as everyone who attends the presentation will get a bag od Homies to take home with them!

Thursday, 7/9/15, 5:45pm – 6:45pm – Dynamite: The Next Ten Years – Join the Dynamite Entertainment team and their star-studded line-up of creative talent as they forecast their game-changing projects of 2016 and beyond, including James Bond, Grumpy Cat, Bob’s Burgers, Vampirella, and more. Special guests David Gonzales(creator of Homies) and Gail Simone (Red Sonja, Swords of Sorrow) will take the stage for a surprise announcements, including awesome developments regarding Grumpy Cat! Attendees will also receive complimentary Homies figurines. Room 6DE.

Also at the show, there are a few giveaways that you should be on the lookout for. Copies of both The Spirit #1 and Bob’s Burgers #1 will be free to take home at a few retailers on the show floor. Not only that, but you’ll also be able to meet the creator of the burger-serving cartoon, and get your book signed, as Loren Bouchard will be at the Diamond Booth (#2401 on the floor) on Friday the 10th, between 12pm and 12pm.

Here’s where you can snag some free comics:

Jason's been knee deep in videogames since he was but a lad. Cutting his teeth on the pixely glory that was the Atari 2600, he's been hack'n'slashing and shoot'em'uping ever since. Mainly an FPS and action guy, Jason enjoys the occasional well crafted title from every genre.
@jason_tas
Previous SDCC 2015: comiXology announces show exclusives and giveaways
Next Comic Shop Picks: SDCC week edition