Ha! Not what you were expecting me to review during horror month, eh?…Ha…ha…*sigh*. 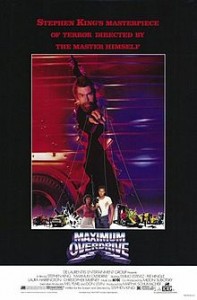 Maximum Overdrive is widely accepted as the worst Stephen King film ever produced. Ironically it was also the only movie of his that only he directed. The idea behind Maximum Overdrive could be seen as intriguing, though not necessarily what I would call ‘traditional’ horror. Basically all (and apparently Stephen King has a loose definition of the word “all”) of the electronics in the world suddenly go haywire and start mass murdering everybody.

Five minutes into Maximum Overdrive you will see all of the following: An electronic sign spelling out profanities at everyone, Stephen King being called not-so-nice things by an ATM machine, and AC/DC getting into a car wreck… and presumably dying (they killed off AC/DC?! Don’t remember that… -ed). Trust me folks, it only goes downhill from here.

I’ve summed up the basic plot already, but to go a bit more into detail: Several people are stuck in a truck stop along the highway after all of the trucks parked there decide to go haywire and start circling around the building. After a while, one of the other main characters, a young boy, ends up sneaking into the gas station looking for his father. His father, ironically, was actually the first victim of the trucks.

After a short while, the owner of the truck stop gets tired of sitting around and (I kid you not), walks out of the front door, with a bazooka and starts laying waste to a few of the trucks. From this point on, the movie is packed with explosions, terrible “horror” music redone by AC/DC (did I mention they made the sound-track for Maximum Overdrive?), and horrible….just genuinely terrible, acting.

The acting isn’t even laughable, it’s purely absurd in several places, from the beginning all the way to the end. Specifically one of the truck stop waitresses who runs outside and starts yelling at the trucks encircling the building, whilst moving like a nurse from Silent Hill.

As I mentioned earlier, the music is done by one of the most iconic bands in history: AC/DC. For any other movie (and honestly, even for this one), that would be an impressive feat, but the problem here is… this is a horror movie. If it were (supposed to be) an action film, a testosterone-fueled shoot-em-up, that would be perfect. But they simply do not belong anywhere near the creation of a “horror” movie, nor would I ever pair them up in my head with the king of horror himself.

This movie is ridiculous, it’s one of the worst films I have ever seen in my life. It’s just a humongous disappointing creation of Stephen King. Terrible acting, terrible music… just horrid plot and ending… and I would watch it again in a heartbeat. I had a blast watching Maximum Overdrive, it was stupid, but it was the good kind, if ever there is such a thing. Maximum Overdrive can compare to games like Ride to Hell: Retribution; they’re so dumb they have to be seen to be believed. It was still better than Friday the 13th though (someone’s going to kill me for saying that).

I know it doesn’t seem like this doesn’t belong in horror month, but it was a type of horror… horribly bad (obligatory stupid joke has thus been made).

Five parts actual review, 2 parts sarcasm, 2 parts bad puns, and one part self loathing = one of my game reviews.
Previous BEHIND THE SONGS OF HALLOWEEN OTOME: TYLER THOMPSON
Next Apple announces a pair of new iPads