Recent events such as the Zoe Quinn controversy have brought to light a major problem with video game journalism. 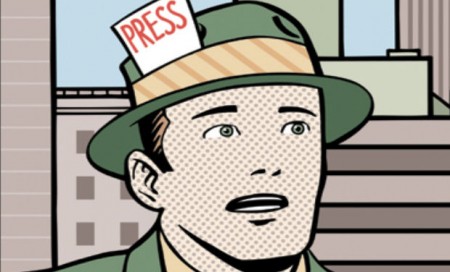 Corruption and general unprofessional behavior in video game journalism is unfortunately all too common at present, in fact it has never been more unethical than it is now. This is not to say all video game journalists are unscrupulous; there are responsible writers like Erik Kain, who do their research and report the facts (in fact he could teach all of us a valuable lesson about journalism integrity). Sadly, more reasonable voices like these tend to get drowned out in a sea of vitriol. The most recent examples of this would be a deluge of well known publishing sites like Gamasutra, Kotaku, and Polygon unilaterally attacking the gaming community shortly after the controversy erupted.

Insults abound in some of these articles, with words such as “belligerent” and “entitled” written in them. Other condescending quips like “they don’t know how to dress or behave” turn up as well. Even developers experience the brunt of toxic rhetoric. Kotaku’s Jason Schreier once posted an article titled “Game Developers Really Need to Stop Letting Teenage Boys Design Their Characters” in response to the Dragon’s Crown character designs. Kate Cox, an author at Kotaku, alleged that Twisted Metal designer David Jaffe said something misogynistic in her editorial piece “Does David Jaffe Really Recommend His New Game As A Sexual Aid”? Jaffe defends himself when speaking directly to Polygon’s Ben Kuchera, saying that he did not in fact make said remark, and that this was fabricated by her.

The video game industry itself is also involved in some of unethical activities that occur in video game journalism. It goes without saying that the most notable example in recent years is Geoff Keighley; a famous video game journalist that came under fire after an interview he had with LevelSave’s Austin Griffith, where he was sitting next to a table of Mountain Dew and Doritos. Also alongside Geoff was a large poster depicting Master Chief from Halo 4.

To this day, some people playfully label him the “Doritos Pope”, which he even jokes about on Twitter. There are lesser known instances of corrupt activities like nepotism in video game journalism. Anthony Burch, a writer for Borderlands 2 claims that friends of his who worked for Destructoid penned up good reviews for BL2 DLC that he wrote for. If what he’s saying is true, that would indeed be a conflict of interest.

Another alleged conflict of interest is the apparent relationship between Polygon reviewer Danielle Riendeau and developer of the popular indie game Gone Home, Chris Remo. Posted by a user from 4chan, the image catalogs a timeline of friendly conversations the two had, even citing the Idle Thumbs podcast episode where there was an admittance of good friendship. The game, reviewed by Danielle, received a 10 out of 10 on Polygon.

I think we’re reaching a crossroad here, one where we as a community should ask ourselves where we’d like video game press to go. Do we continue to accept things like nepotism in video game journalism? Or do we discourage it, and keep writers honest? While it’s true there will always exist a certain amount of this everywhere, be it politics or journalism, you can do your part to help reduce it as much as possible. Even those who work in the profession can keep journalists honest, and encourage more professional behavior. Authors can self-regulate, and publishing sites can be a little more discretionary in choosing who writes for them. As for the the gaming community itself, comment on some obvious conflicts of interest, and lack of integrity, don’t just let it slide out of fear of backlash.Sure, authors and even other readers can call you misogynistic, or make some other ridiculous claim about you based on absolutely nothing, but that shouldn’t discourage honest discourse. There’s already been a push-back so large that Kokatu and Polygon have reported a change of policy.

Well, my name's Christopher Deleanides as you all know and I'm the Nintendo Editor here at BG. I've been playing video games since 1992, and I've been a Nintendo fan the entirety of those years. My love for video games as well as Nintendo hasn't changed, and probably never will. The only thing that comes close is politics, as I'm very deeply involved in both local and international issues.
Previous Bayonetta 2 Nintendo Direct
Next Goro to strong-arm Mortal Kombat X in Spring, 2015