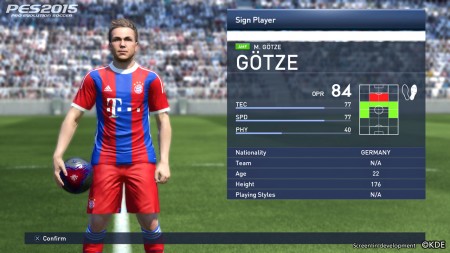 PES 2015 will have a keen eye on the details of what makes a soccer match something special when the demo for the game hits the PSN on September 17th. The publisher’s mantra for the game has been “the pitch is ours” and it’s had two production teams hard at work on the game (Tokyo and Windsor) to “recreate the drama and tension associated with a vital match” with the upcoming title.

Most of that work has gone into some new features for Pro Evolution Soccer 2015  from the looks of things as Konami has announced a laundry list of new things that soccer fans will be able to do in PES. Some of what’s new you might not notice, but most all of it will directly impact gameplay in some major ways including all new modes of play and an attention to detail that sounds pretty spectacular.

Have a look below at the full list of what you can expect to see and play around with in PES 2015. Though the demo is incoming in about a month from now, there’s still no firm release date for the title, though you can expect to see it hitting the PS4, PS3, Xbox One, and Xbox 360 when it finally does debut.

Jason's been knee deep in videogames since he was but a lad. Cutting his teeth on the pixely glory that was the Atari 2600, he's been hack'n'slashing and shoot'em'uping ever since. Mainly an FPS and action guy, Jason enjoys the occasional well crafted title from every genre.
@jason_tas
Previous The Last Will and Testament of Charles Xavier comes to a close in Uncanny X-Men #25
Next Activision reveals Call of Duty: Advanced Warfare’s multiplayer modes