The headset-giant and Sony have just announced a brand new lineup of PS4-exclusive, officially-licensed headsets and accessories. 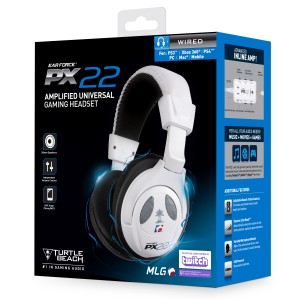 “Turtle Beach is excited to work with Sony to create headsets for the PlayStation 4 system,” said Juergen Stark, Chief Executive Officer at Turtle Beach. “Audio is an important part of the next-generation PlayStation experience, and our emphasis on versatile, multi-platform headsets will ensure consumers have an optimal experience across their PlayStation 4 console and PlayStation® Vita companion devices.”

One of the biggest names in gaming audio, Turtle Beach’s already available and PS4-compatable headsets (including the PX4 and P4C) are already big enough hits all by themselves. The Beach isn’t stopping there though as they and Sony have just announced the first official series of audio equipment for the new console. Honestly, they’d be kind of silly not to if the numbers released by the company today are accurate.

Turtle Beach is reporting that November 2013 (the launch month of both the PS4 and the Microsoft Xbox One) saw a monster 200% jump in sales of their headsets over the previous month. That’s a giant number that definitely signals the somewhat obvious fact that gamers like their headsets.

Exactly what we’ll be seeing come out of the deal has yet to be announced (though we do know we will be seeing a ‘tournament-grade’ headset) or detailed in any way, but Turtle Beach will be taking the wraps off the new sets this coming Summer and you can actually expect to see them on store shelves this Fall.

Pictured above is the PX22 headset, which is PS4 (as well as last-gen system and PC) compatible.

Jason's been knee deep in videogames since he was but a lad. Cutting his teeth on the pixely glory that was the Atari 2600, he's been hack'n'slashing and shoot'em'uping ever since. Mainly an FPS and action guy, Jason enjoys the occasional well crafted title from every genre.
@jason_tas
Previous New HULK comic on the way from Marvel this Spring
Next Midnight City announces Krautscape; Slender and Double Dragon heading to new platforms