Since the birth of video gaming in the 1970’s many gaming franchises have come and gone.  Some do keep going, but are sadly now shadows of their former selves.  Just take a look at the recent iterations of games such as Space Invaders, Frogger and Bionic Commando!  The longer that franchises such as these keep limping on, the more they tarnish the memory of the wonderful early versions that brought them such goodwill in the first place.

Conversely, some video games do exactly the opposite, going from strength to strength with every new release.   Even though these series’ have been running for years (and on many different consoles), they continue to improve, innovate and entertain the video gaming public.

Castlevania, Metal Gear and Final Fantasy are all such members of this very elite club.  There is one catalogue of video games, however, that comes out a head and shoulders above the rest in this regard, The Legend Of Zelda. 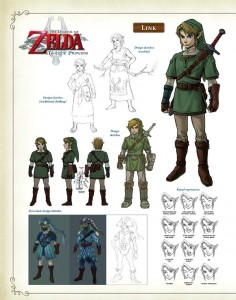 The Legend Of Zelda game series was co-designed by Nintendo greats Shigeru Miyamoto and Takashi Tezuka.  Between them, these industry giants have worked on classics such as Super Mario Bros 1, 2 and 3, Super Mario World, The Legend Of Zelda: Ocarina Of Time, Animal Crossing, Pikmin, Star Fox, and F-Zero among many, many others.  The Legend Of Zelda games were initially designed as a Japanese take on Tolkien’s Lord Of The Rings with elements of high fantasy themed action and puzzle solving.  The games focus largely around an adventurer called Link and a Princess named Zelda.  Since it’s first incarnation over 25 years ago, on the NES in the West and the Famicom in Asia, it has become one of the world’s most loved video game franchises.

Hyrule Historia, a hard cover book charting the entire history of The Legend Of Zelda games, has now been released by Dark Horse Books.  It attempts to cover, in detail, all the many Zelda games such as The Legend Of Zelda, The Adventure Of Link, Ocarina Of Time and Skyward Sword, to name but a few.  These games have been released over a period in excess of 25 years and on many different Nintendo consoles, so endeavouring to cover them all in depth is no mean feat.

The first thing to mention is the book looks beautiful.  This publication is obviously a labour of love and it shows.  Originally published in Japan in 2011, it has now been translated for a Western audience.  The cover alone is gorgeous with bright gold lettering and an accompanying Zelda ‘triforce’ symbol emblazoned on the front.  Inside is no less stunning. The pages are of a superior paper stock and are both shiny and silky smooth to the touch.  Due to the incredibly high print quality images and sketches, of which there are many, ‘pop’ off the page.

The tome is split into four main sections in a bid to cover the game series’ established history and many versions over the years.  The first section deals primarily with the latest iteration which out on the Wii, The Legend Of Zelda: Skyward Sword.  The second portion tries the exceptionally brave task of bringing together, and making sense of, all the different threads of the Zelda history from all the many games.  The numerous designs, creative doodles and drawings from all the games in the continuity are assembled in the third main section.  Lastly, we have a Zelda manga (Japanese comic book) to round off the volume.

This compendium of all things Zelda will not disappoint any fan of the games.   It has clearly been assembled by a team who not only reveres the stories and characters, but also knows the series intimately.  This shows in the attention to detail and the lavish construction of the book itself.

The only main criticism one may have is the amount of space dedicated to the series’ newest addition, Skyward Sword.  It seems strange that with a wealth of video games so rich in terms of design, history and characters so many pages are dedicated to a single iteration, especially the latest one.  That being said, the Skyward Sword section is still wonderfully constructed and deals with what is a wonderful game in great depth.  Furthermore, the other chapters more than sufficiently cover the other games in The Legend Of Zelda series.

The Hyrule Historia is not just a must-have item for any fan of the Legend Of Zelda series, but video games in general.  It is an excellent companion piece to some of gaming’s greatest triumphs.  The dazzling book will keep your interest long after you have completed Link’s latest adventure, and will live on as a constant reference tool.  Long live Princess Zelda!