When you take the design talents from titles like Deus Ex and Half Life 2 and mix them up with the studio that worked on Bioshock 2 – you should get something a little special right? Well let’s find out!

Arkane bring us a genre that typically divides gamers – stealth. Even the watered down stealth action of titles like Metal Gear Solid and Splinter Cell can prove too much for some. Frustrating controls, fiddly systems and punishing combat just turns of a large majority of gamers. Arkane look to put the right with Dishonored. Part RPG, part stealth and part action game you really get the sense that Dishonored is offering you a unprecedented amount of freedom – and you’d be right.

You take on the role of Corvo. The former bodyguard to the Empress. I say former as on the day you returned from a voyage to find a cure for the plague gripping the land the Empress is slain by assassins. Corvo was nabbed as the killer and thrown in to jail – the Empresses daughter was snatched and was never heard of again. With the aid of a small band of loyalists you escape from jail the eve of your execution. Corvo must now fight to clear his name, locate the rightful heir to the throne and exact bloody revenge for the murder of the Empress.

The world of Dishonored is gorgeous. Not in the sense that it’s all blue skies and fluffy bunnies. Quite the opposite really as the industrial city of Dunwall is dank, drab and depressing. With its plague infester Weepers (people infested with the mystery plague that walk the streets attacking people and coughing up blood), totali tarian curfews and rat infestation it’s not exactly a haven of tranquillity. 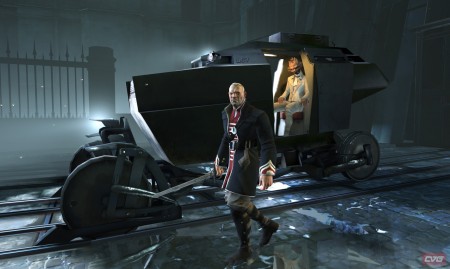 As you take to the streets in one fo the games 9 missions you must guide Corvo as he attempts to right the wrong. Your choice on how to do that is incredibly open ended and refreshing in this current climate of scripted gaming experiences. Each mission has a final objective but how you get there and in most cases what you do to the person in question are all open to your own interpretation. Choose to save a city guard whose destined to be poisoned and take our your subject in a non lethal way. Or just emerge from the shadows and slit his throat after he’s killed the guard. Or, and this is unique to this game, just come out and shoot both guys in the face and fight your way out from there. You really can use any method and not feel that the game is forcing you to take one route of the other.

Helping you complete each mission is the range of skills at Corvo’s disposal. Locating hidden runes around each level will let you upgrade and buy new abilities such as a double jump, faster movement, the ability to turn enemies to dust instantly upon a stealth kill. Another key skill is the Blink skill. This acts like a teleport allowing you to move unseen short distances in exchange for a little manna. Combining these abilities with your own play style means a unique experience that shapes each person’s play through.

I mentioned earlier the world of Dishonored. It has a truly unique setting that has been fleshed out well and give a rich look and feel to make it a world you can invest in. The textures can be a little muddy at times and frame rate has been known to dip for a brief few moments but overall the game is one of the best l ooking titles this year so far. 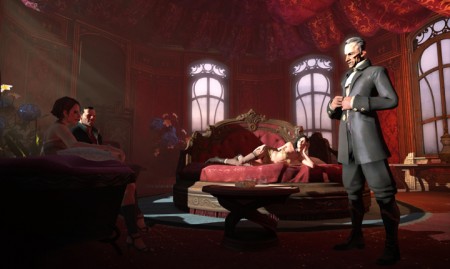 Longevity could be a problem for some. The game is built so that you take your time, explore your options and just immerse yourself in the world around you. Taking on sub-plot and exploring for Runes and Bone Talismans (a character buff hidden ability around the missions).You could, if you went all action, probably blunder and blast your way through in about 6 hours’ish or less – you would, however have missed the entire point of the game and lost 60% of it’s enjoyment. Played as intended, at a moderate thoughtful pace, you will likely get 10 – 12 hours plus. Explore fully and do all side missions then you could maybe add another 6 to 8 hours on top of that. It really is dictated by your play style and patience.

Replayability is moderate. You can go back and attempt any unlo cked mission at any time. You attempt it with the stats and equipment you had at that time. So you can’t go back all powered up from the end of the game and attempt and earlier mission with those skills. Taking on each mission a different way is great fun though and will add hours to the game if that’s your thing.

Dishonored has done the impossible for me. It’s made me enjoy a stealth title. Not because I’ve been broken to it’s way. But because it adapted to mine. It took its core mechanics and melded them to my play style. Allowing me the freedom to do the one thing every game should – enjoy myself and immerse in the world.

It’s not perfect. Graphical wobbles here and there and a sli ghtly lacklustre series of vocal performances knock the final scoring slightly as does a story that doesn’t quite live up to what it could have been given the rich world around it.

I can’t recommend Dishonored highly enough for anyone previously turned off to the world of stealth. Those that are fans of the genre will already be worked up and need little encouragement from me to know this is an essential purchase for them.

Zeth is our EU Senior Editor and has been writing about video games since he joined BG back in 2008. He's pretty old and has been a gamer since he played Space Invaders as a young boy in the 80's. His genre tastes lean towards platformers, point-and-click adventure, action-adventure and shooters but he'll turn his hand to anything.
Previous Frankenstein runs rampant at NYCC
Next King of Fighters XIII is the next NA PS+ Game