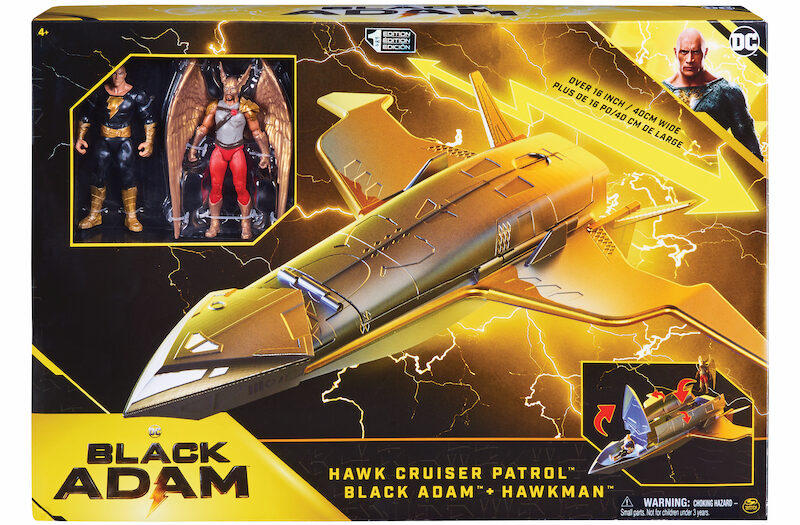 Ready for Black Adam? There’s an action figure onslaught coming with the film

Along with a ton of other stuff floating around out there, Spin Master will be releasing a full lineup of Black Adam toys, in multiple scales.

Save some shelf room

Literally years in the making, Warner Bros’ big screen adaptation of Black Adam is finally (almost) here. The movie is set to bring actor Dwayne Johnson’s version of the title villain/anti-hero to life, along with a version of the iconic DC super-team, the Justice Society.

It’s also aiming to be a kind of jumping on point for what looks to be a revitalized DC movie universe. And we just might (read: definitely will) see a certain classic hero back for the first time in a while too. All in all, it’s looking great, and like a can’t-miss for DC fans. So, of course, there are gonna be toys.

While a few different companies will be releasing Black Adam merchandise, it’s Spin Master that’s “the #1 toy licensee for DC”, so you better believe the company is getting a whole bunch of Black Adam merch out the door.

That cavalcade will begin with Spin Master’s staple 4″ line of action figures, and rolls from there into 12″ and even a play set/vehicle. Everything that you see below is shipping right now too, so keep an eye out.

Get ready to bring these characters to life! Each 4-inch figured features incredible details, authentic Black Adam movie styling and 9 points of articulation, so you can pose them into dynamic stances and recreate epic adventures. Collect Black Adam, Hawkman, Dr. Fate, Atom Smasher and Cyclone in the 4-inch scale. Each figure comes with 2 accessories. Figures sold separately.

Unleash justice on the modern world with this poseable, 12-inch Black Adam feature figure with 11 points of articulation, authentic move sculpts and detailing. Squeeze Black Adam’s legs to throw a power punch at enemies. Press his chest to light it up and hear 20+ movie phrases and sounds. Includes two interchangeable accessories—punch blast and lightning—with unique sounds and light effects.

Jason's been knee deep in videogames since he was but a lad. Cutting his teeth on the pixely glory that was the Atari 2600, he's been hack'n'slashing and shoot'em'uping ever since. Mainly an FPS and action guy, Jason enjoys the occasional well crafted title from every genre.
@jason_tas
Previous Trailer: Killing Floor 2’s annual Halloween update is live and ready to shamble
Next Trailer: The first game to feature Star Trek Prodigy arrives on consoles and PC