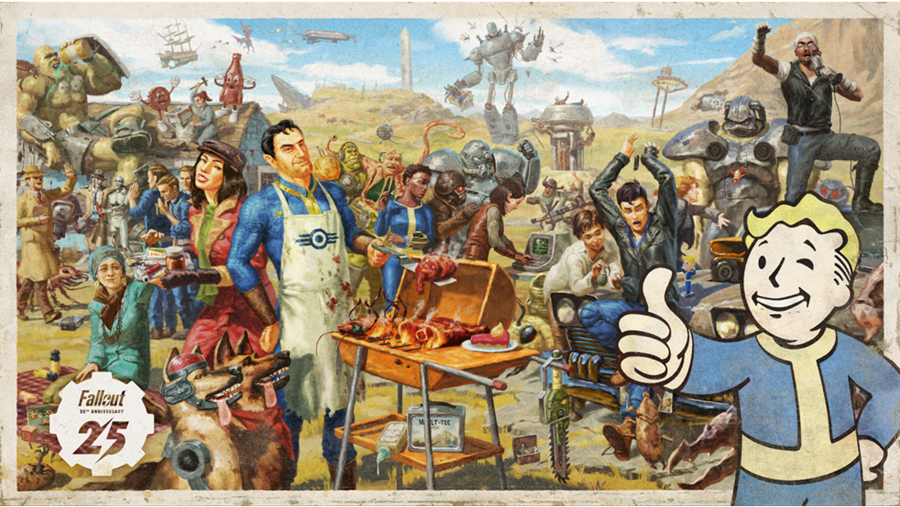 Bethesda has a big month on tap for Fallout. Free play-time, new updates, and some nice giveaways will dot the 25th birthday for the franchise.

Falling into an anniversary

Has it really been 25 years of Fallout? Indeed it has, as the first game in the series hit the PC way back in 1997. That was a very different title than what we see today of course, and came in the form of an isometric cRPG.

The modern games have translated that original formula into a first-person role-player, complete with multiple ways to play. One of the latest was Fallout 76, an online MMO(ish) title that brought the Fallout experience into the multiplayer realm. We all know how that title was originally received, but my how the times did change.

Fallout 76 grew exponentially after launch, not to mention evolved. Publisher Bethesda kept adding and adding to the title, and at the point it’s more or less a traditional Fallout experience, just with a few extra bells and whistles. The point being that Fallout is a fixture on the gaming landscape, and doing quite well for its 25th.

And on that note, Bethesda has a pretty great month planned for both existing and prospective players. That goes for Fallout 76, as well as the mobile-centric Fallout Shelter and more.

The celebration starts with 76, and a free week of play for those who’ve yet to take the plunge. That kicks off now, and will run through the 10th of October. Better yet, there’s also a sale on the game happening, and you will (according to Bethesda) be able to “keep playing without missing a beat of progress”.

Going further on the “sale” front, there’s a complete franchise sale happening as well. That will include the whole Fallout universe, as it exists on Steam, Xbox, and PlayStation. All three of those sales are happening now, with the Steam sale coming to a close on the 18th, and both console sales wrapping up on the 12th.

We’re adding new content to Fallout Shelter for the first time in over four years! Take on an alien threat in an all-new quest line featuring new enemies, take up arms with new weapons, recruit new Dwellers and decorate your Vault with a new celebration room theme. We’ll have more to show off when the update launches next week, so stay tuned!

On top of all of the above, there’s also some giveaways coming up, and an ever-enigmatic “much more” as well. So basically, stay tuned, and check out the official page for the game to stay up on what’s happening.

Jason's been knee deep in videogames since he was but a lad. Cutting his teeth on the pixely glory that was the Atari 2600, he's been hack'n'slashing and shoot'em'uping ever since. Mainly an FPS and action guy, Jason enjoys the occasional well crafted title from every genre.
@jason_tas
Previous Trailer: Biomechanical horror title Scorn landing a week ahead of schedule
Next Actioner Clash: Artifacts of Chaos about to get new Next Fest demo