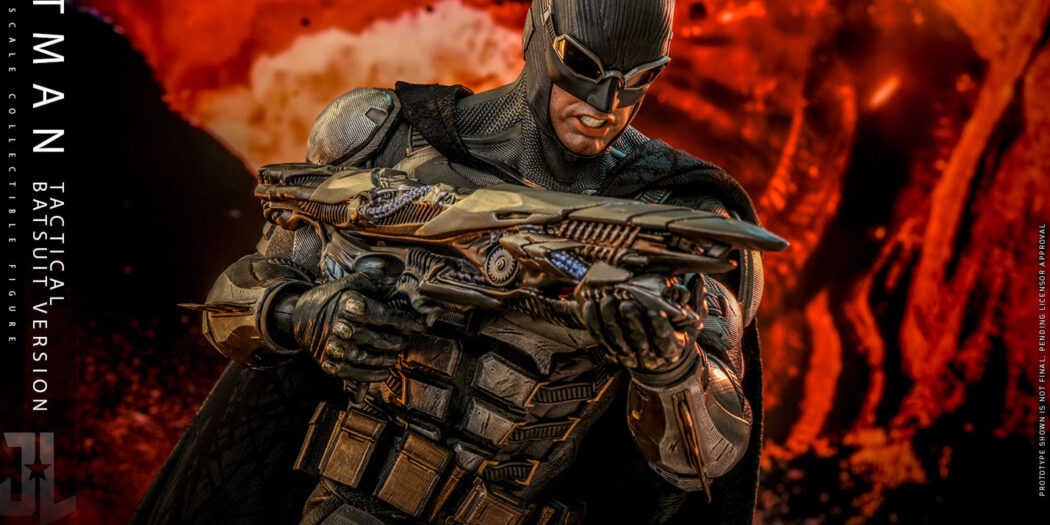 As featured in the Justice League film, the Tactical Batsuit is getting a revisitation from Hot Toys, with a 2023/2024 launch window.

One of the costumes that Batman wore in the so-called Snyderverse DC films, the Tactical BatSuit is a kind of mid-point between the heavily armored “Dark Knight Returns” suit from BvS, and the hero’s standard wear. It kind of comes off as an armor-plated version of the latter, which is pretty unique.

You might remember though, that Hot Toys already had a version of the Tactical Batsuit out there. So yes this is a remake, but it’s a darn good looking one.

After forming the Justice League, Batman designed a new tactical suit for the fight against the invading Parademons. The updated suit offers light armored protection without hindering agility. Inspired by Zack Snyder’s Justice League, the Batman (Tactical Batsuit Version) 1/6 Scale Collectible Figure by Hot Toys features a cowled headsculpt with interchangeable eyes and lower face pieces that have been brilliantly crafted to capture Ben Affleck’s likeness from the film.

As you can see, the figure sports the likeness of actor Ben Affleck, but there’s a lot more happening with the face. If you read through the description above, then you saw that it’ll have a tremendous amount of display possibilities, in terms of facial expression.

As for the suit itself, it’s battle-scarred, and includes some weathering from Batman’s battle with the Parademons. He’s packing too, with a “screen-accurate Parademon gun, Batarangs, grapple guns and multiple Bat gadgets, and is finished with a Parademon-themed base.”

Batman is up for pre-order now from Sideshow Toys, Hot Toys’ retailing partner, and has a price of $300 USD. Expect to see him start shipping some time from October ’23 through March ’24. Yes, that’s a wide net.

Jason's been knee deep in videogames since he was but a lad. Cutting his teeth on the pixely glory that was the Atari 2600, he's been hack'n'slashing and shoot'em'uping ever since. Mainly an FPS and action guy, Jason enjoys the occasional well crafted title from every genre.
@jason_tas
Previous The movie comes to your desktop with Icon Heroes’ new Top Gun mini-helmets
Next Humans and AI combine in Bandai Namco’s new mecha-combat game Synduality