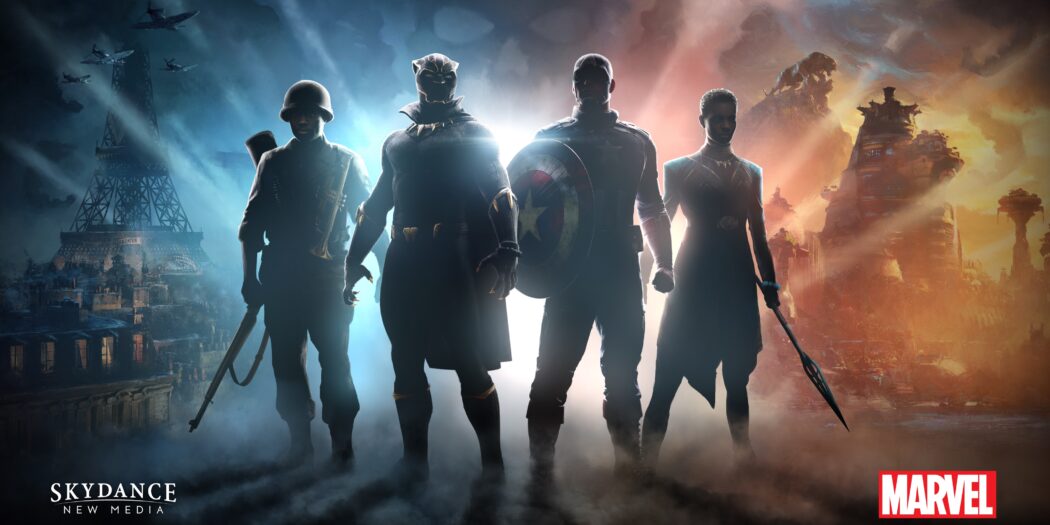 Cap. Panther. WWII. Right now that’s almost all there is to go on as pertains to Skydance’s new Marvel title. Well, that and a pretty slick teaser/trailer.

Revealed at D23 Expo today, Skydance and Marvel took the wraps off of a brand new, “AAA game”, set in a fresh take on the Marvel Universe. So presumably this isn’t set in the same universe as the PlayStation Spider-Man and Wolverine games.

Have an early look:

While there sure doesn’t look like there’s any gameplay included there, it’s tough not to be excited for what Skydance might deliver with this one. Not only does this take place at the height of WWII, but it stars both Captain America, and what’s sure to be an ancestor of T’Challa in the Panther suit.

As you can see too, there will apparently be two more characters, who I’d guess might be Bucky and one of the Dora Milaje. Paris also features pretty well in the teaser above, and as we can see in the key art, Wakanda too.

Still, that’s not much to go on, so hopefully there’ll be a little more revealed, sooner than later. So far though, it’s definitely worth keeping on your radar.

Jason's been knee deep in videogames since he was but a lad. Cutting his teeth on the pixely glory that was the Atari 2600, he's been hack'n'slashing and shoot'em'uping ever since. Mainly an FPS and action guy, Jason enjoys the occasional well crafted title from every genre.
@jason_tas
Previous Marvel’s Midnight Suns finally has a new release date, and it’s landing before the end of the year
Next There’s a heck of a lot of Assassin’s Creed coming up