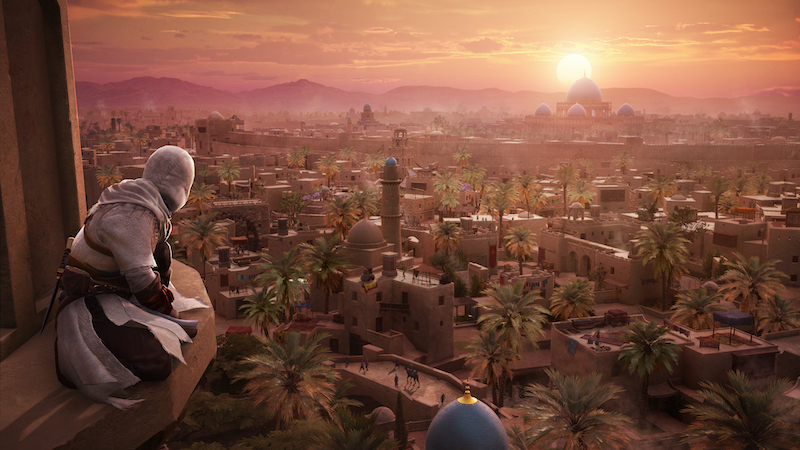 Last weekend’s Ubisoft Forward presentation showcased a ton of stuff from the publisher, and a good deal of that was Assassin’s Creed related.

Back with a vengeance

Is it accurate to say “back” when you’re talking about a franchise that never really ‘left’? In this case, I think it might be, since the last title in the Assassin’s Creed series was Valhalla, and that was in 2020. So it will be essentially a three year break for the AC universe, since there isn’t a new game coming out here in 2022. But as you’ll see, the series is set to explode like never before, and that’s not hyperbole.

Dubbed the Assassin’s Creed: Mirage + Showcase, the AC portion of Ubisoft Forward didn’t disappoint. A total of five new games were announced, and that does include Mirage, which will be the next title to see release.

Mirage follows a character that Valhalla fans should know well, Basim Ibn Is’haq. If you don’t know who that is, he’s a master Assassin and was a character in Valhalla. Mirage is not a sequel to Valhalla though, it’s a prequel.

The game kicks off 20 years prior to that Norse-themed title, and is centered in “Baghdad at the peak of its Golden Age.”

It offers a narrative-driven action-adventure experience with an intriguing coming-of-age storyline, charismatic protagonists, a majestic open city and modernized legacy gameplay focusing on parkour, stealth and assassinations. They will embody a new hero, Basim Ibn Is’haq, a singular street thief with a mysterious past, who will join the Hidden Ones in Alamut on a quest for answers. Basim’s mentor, Roshan, will be voiced by Emmy-winning actress Shohreh Aghdashloo. Assassin’s Creed Mirage is an homage to the series, and a particularly special tribute to the first Assassin’s Creed®. The announcement of the game comes with a cinematic reveal trailer with original music composed by Brendan Angelides, who is also the music composer for the game.

As you can see there, the themes and setting of Mirage is very deliberate. Ubisoft is paying tribute to the game that started the AC legacy, on what will be the 15th anniversary of the brand. And while Altair is nowhere to be found, it’s great to see Assassin’s Creed dip back into those waters.

Assassin’s Creed: Mirage will be coming to the Xbox Series X|S, PS5, and PC, along with last generation Xbox and PlayStation consoles, and Amazon Luna. There’s no release date as of yet, though the game is up for pre-order now.

And as you might expect with this kind of marquee title, there are some special editions.

Before you move onto the next section, make sure you check out the special video below, breaking down the trailer:

While Mirage is the next headlining game in the set, Assassin’s Creed has a four more games coming. Those releases will include both console/PC titles and mobile stuff. Yes, I know, I’m not wild about mobile either but it actually looks kind of cool.

But before we get to that, there’s Red, followed by Hexe. Those are just codenames, as you might’ve guessed, but both titles sound like they could be winners. Red takes place in feudal Japan, which has been rumored as a locale for AC for what seems like forever. Oh, and it looks like there are ninja-assassins. So yeah, get pumped.

Then after Red, will come Hexe. This AC adventure will take place in the midst of the inquisition, and be crafted at Assassin’s Creed’s birthplace, Ubisoft Montreal. It will also have Clint Hocking as director.

And finally, there’s Infinity. Infinity is a breed unto itself. It will continue the modern day AC narrative, while also offering multiplayer as a standalone experience. So it will truly be something different as compared to the rest of the franchise.

Now, I ls mentioned the ‘m’ word. And of course, that’s mobile. the title codenamed Jade is the first mobile Creed in a long time, and Ubi is promising quite a bit with it. Namely, that it’s a “AAA RPG”, but also that it’s set in ancient China, which has also been rumored for some time.

It might be worth your time, even with the format, and especially if you’re a big fan.

All that and a series too

On top of the tidal wave of gaming news, Ubisoft also took the wraps off of an upcoming live-action show. Set to air on Netflix, the as-yet unnamed series promises to be “epic” and “genre-blending”.

As you can see, much like with all of the games coming, there’s no release date as of yet for the show. Nevertheless, if you’re an AC devotee, you have quite a bit to look forward to over the nest few years.

Jason's been knee deep in videogames since he was but a lad. Cutting his teeth on the pixely glory that was the Atari 2600, he's been hack'n'slashing and shoot'em'uping ever since. Mainly an FPS and action guy, Jason enjoys the occasional well crafted title from every genre.
@jason_tas
Previous Trailer: Skydance and Marvel announce a new WWII-era game starring Captain America… and Black Panther
Next Trailer: Second major update arrives for 3D Realms’ Graven