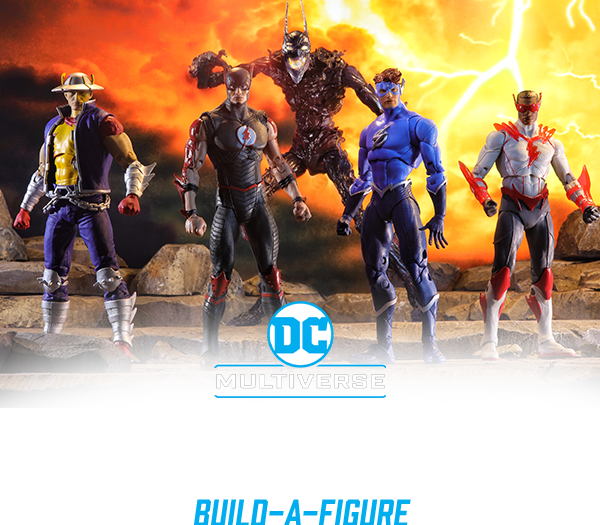 The multiverse comes to life once again from McFarlane Toys, with the announcement of the Speed Metal wave. Flash fans, this one’s for you.

Did DC go overboard with “Metal”?

Regardless of what you think of the whole “Metal” line, it seems to have replaced DC Comics’ tried and true “Crisis” series of events. Creator Scott Snyder first brought audiences Dark Knights: Metal, but that spun out into a bunch of subsequent crossovers and one-shots. And one of those, was Speed Metal.

Focused on the Flash, Speed Metal brought Wally West into the spotlight. Wally was left lost in the Speed Force after the Flashpoint event, and brought back to the modern DCU, a man out of time and space. Speed Metal though, planted him the New Gods’ Mobius Chair, and granted him the remaining powers of Doctor Manhattan (yes, that Doctor Manhattan, it’s a long story).

But the tale did more than that, giving the wicked Batman Who Laughs massive cosmic power of his own. That turned him into The Darkest Knight, a being of malevolence who was hunting for Wally, to claim his power as well.

As you can see, there’s… a lot to it. But along with all the convoluted multiversal gunk, there are also some pretty slick designs. And those are the stars of the new Speed Metal wave from McFarlane.

As you can see above, each figure comes with a piece of The Darkest Knight, so you can build the (slightly) oversized figure. He looks pretty cool too, with some translucent plastic effects possibly happening. It’s a little tough to tell from the promo shots.

The wave is set to ship some time next month (October, 2022), and each figure is priced at $24.99 USD. As you can also see, they’re up for pre-order right now from our sponsors at Entertainment Earth. So if you want ’em, grab ’em.

Jason's been knee deep in videogames since he was but a lad. Cutting his teeth on the pixely glory that was the Atari 2600, he's been hack'n'slashing and shoot'em'uping ever since. Mainly an FPS and action guy, Jason enjoys the occasional well crafted title from every genre.
@jason_tas
Previous Trailer: Skate the City by the Bay with Session: Skate Sim’s San Francisco map
Next Ubisoft taps Dark Horse for new Skull and Bones comic